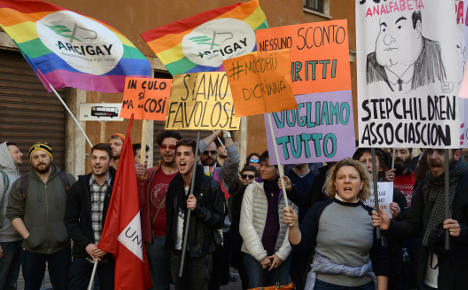 “Betrayal, shame on you!” shouted hundreds of gay rights protesters gathered outside Italy's senate on Wednesday, where they said a contested same-sex civil unions bill was being drawn and quartered.

Last-minute marathon talks had raged within the upper house of parliament all day to reach a deal on a fresh version of the law, after stiff Catholic opposition over attempts to give adoption rights in some cases to gay couples.

Unable to get the bill through in its original form, Italy's Prime Minister Matteo Renzi announced on Twitter he had struck a deal with the centre-right, cutting out adoption and reducing rights to distinguish civil unions from marriage.

“We are very disappointed, very bitter,” Marilena Grassadonia, head of the Rainbow Family rights association, told AFP, adding that lawmakers had slammed the brake on a bill that Italian society was ready for.

“A law on civil unions which does not respect our children is a useless law, an empty law in our opinion. I think any parent would agree with us. (With this bill) it's as if our children have disappeared,” she said.

The new version of the bill is expected to go before the senate for a vote on Thursday evening. Many blame the withdrawal of adoption rights on the anti-establishment Five Star Movement, which unexpectedly withdrew its support last week.

The Five Stars said they could not in all conscience support a move by Renzi's centre-left Democratic Party (PD) to speed up the bill's adoption. Their accusers said the movement had jumped at the chance to hurt the government.

“We're very angry because the politicians are playing their little games and rivalries, everything we hoped to avoid,” said 71-year-old Claudia Toscana, whose son has three children with his gay partner.

“We hoped…everyone could say their bit and vote freely based on what they really think, not just to spite Renzi or this or that politician,” she fumed.

Amid purple balloons and rainbow gay pride flags, young gay couples – some of whom had brought their children to the demo – shouted “Shame on you!”, while students held up a placard reading “Quake in fear, the lesbos are here”.

Toscana's son Claudio Rossi Marcelli, who lives in Denmark with his family, said on Facebook he felt “a strange feeling: we did not exist before. Now we exist but we are worth less than everyone else”.

Italy is the last major country in Western Europe not to offer gay civil unions; close ties with the Vatican have sunk all previous attempts. While some have hailed any same-sex law a success, many say it leaves much to be desired.

“With this law, gays now have rights: to learn English, Spanish or Finnish, pack their bags, emigrate,” quipped one Twitter user, where the backlash against the Five Star Movement has been particularly fierce.

Protester Francesco Zaccagnini, 38, said it was laughable that the new, anti-discrimination law was discriminatory.