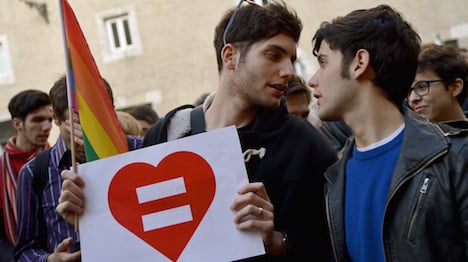 In order to speed up the bill’s passage, Italian Prime Minister, Matteo Renzi, called a confidence vote in Italy’s lower house on Wednesday saying it was “unacceptable to have any more delays after years of failed attempts.”

Renzi’s cabinet survived confidence vote with 369 voting in favour of the bill compared to 193 against.

Earlier on Wednesday, knowing that a majority in the confidence vote was almost certain, Renzi declared that it was “a day of celebration for those who finally feel recognized.”

“By calling a confidence vote, we have bound the government’s survival to the civil rights battle,” Renzi added in his Facebook post.

Other Italians took to Twitter to celebrate, many using the rainbow emoji to show their support for gay rights.

The bill extends many of the rights enjoyed by heterosexual couples to same sex couples, including the legal right to inherit each other’s pensions.
Italy is the last major western European country to recognize civil unions for same sex couples.
In order to get the bill this far, Renzi’s government had already survived a confidence vote in Italy’s upper house in February, but the content of the bill was watered down in the wake of strong opposition from Italy’s centre-right and the influence of the Catholic church.
A draft article that would have allowed gay couples to adopt their partners' biological children was scrapped altogether.
While adoption will not be ruled out entirely, judges will decide on a case-by-case basis.

“The glass is half full,” Gabriele Piazzoni, national secretary of the Arcigay organization, said in a statement.
The Democratic Party senator who first put forward the bill, Monica Cirinnà, called it a ‘hollow’ victory.

“I’m thinking of the children of so many friends,” she said, referring to the bill’s missing stepchild adoption provisions.

Cirinnà said that while the passage of the bill finally recognizes homosexual couples in Italy – there is still some way to go until they enjoy the rights extended to heterosexual ones.

“Now, we must take the second step,” she declared.

Renzi is not the first Italian Prime Minister to attempt to legalize gay civil unions.

Slightly less ambitious attempts were made by the centre-left government of Romano Prodi in 2007 but were abandoned following a huge demo by anti-gay rights protesters.

Head of the Rainbow Families association, Marilena Grassadonia, slammed the bill as a “a monument to the hypocrisy and ineptitude of a political class.” Grassadonia added that the bill would go down in history for its shortcomings.

“This government will go down in history not for having passed the first law on gay unions, but for having denied children their family rights,” she said.