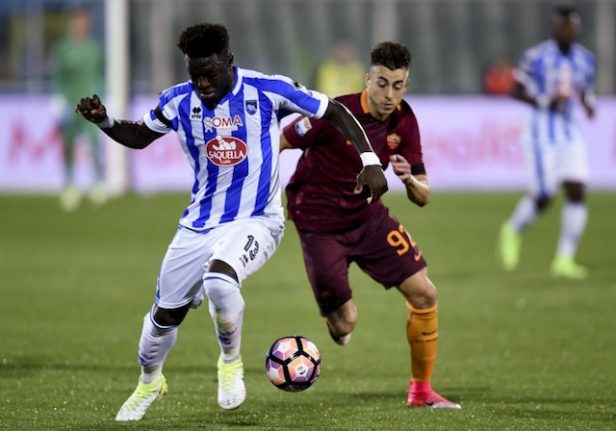 Pescara's Sulley Muntari (left) during a previous Serie A match. File photo: Filippo Monteforte/AFP
The Ghanaian walked off just before the end of last Sunday's Serie A game at Cagliari after angrily confronting home fans, claiming to have been racially abused before being booked.
The 32-year-old received an automatic one-match suspension following his dismissal as he was initially booked for dissent, before receiving a second yellow for leaving the field.
But the sanction was lifted by the FIGC's appeal court.
In a statement they referenced the “particular sensitivity” of the case as grounds to uphold Muntari's appeal after speaking to referee Daniele Minelli.
Muntari is clear to return for this weekend's game at home to Crotone.
There were no sanctions for Cagliari, however, the league ruling that the racist chanting came from “about 10 people, or less than one percent of the sector” of the stadium.
READ ALSO: Verona sanctioned over Muntari racism abuse