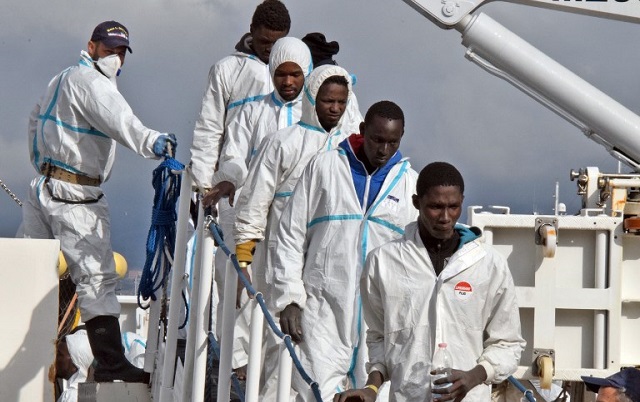 At talks in Rome, senior figures in the fight against the deadly trade said such a move would both draw attention to the gravity of the crimes they are trying to stop and make it easier to do so.

“Migrant trafficking as it takes place in Libya should be considered an international crime, a crime against humanity,” said Admiral Enrico Credendino, the head of a European naval force charged with combating trafficking in the Mediterranean.

Europol's Robert Crepinko said it was time to redefine the nature of traffickers' actions to better reflect their tragic impact.

READ ALSO: 'They got the wrong man': Doubts remain over trafficking suspect's identity

“More than 5,000 (migrants) died in the Mediterranean last year and we don't know about the Sahara but we can assume that it is at least that figure or even more,” said Crepinko, who heads the trans-European police agency's migrant smuggling unit.

Many of the tens of thousands of migrants reaching Italy via Libya every month come from sub-Saharan Africa and begin their treks north by paying traffickers to cross the vast desert.

“There are still (African) countries that don't consider it (smuggling) as a crime,” Crepinko said. “If it is considered a crime against humanity, then of course there are certain obligations for the authorities to act.”

The proposed move would also ensure trafficking-related crimes could be prosecuted long after they are committed, he said.

The idea is in its early stages and it is not clear exactly how it would be implemented as there is no global treaty defining crimes against humanity.

Previous prosecutions have been carried about on the basis of bespoke definitions created for hearings such as the Nuremberg and Tokyo trials after World War II and the International Tribunals on former Yugoslavia and Rwanda.

A UN working group is currently attempting to plug the gap in international aw with regard to crimes against humanity.

Credendino said the traffickers could not be categorized as simply providing an illegal transport service. “There are recurring reports of migrants being detained in inhumane conditions under duress, deprived of freedom, attacked and abused,” he said.

“Some are sexually abused and some women are being forced into prostitution. The line of demarcation between migrant smuggling and human trafficking is getting thinner and thinner.”

Separately, Credendino unveiled plans to step up his naval force's training programme for the Libyan coastguard after a first batch of 130 officers underwent sessions in Malta and Libya.

Another 1,000 of the coastguard's staff will spend time with peers in Spain and Italy in the next year as efforts continue to make the force more effective at patrolling Libya's coastal waters.