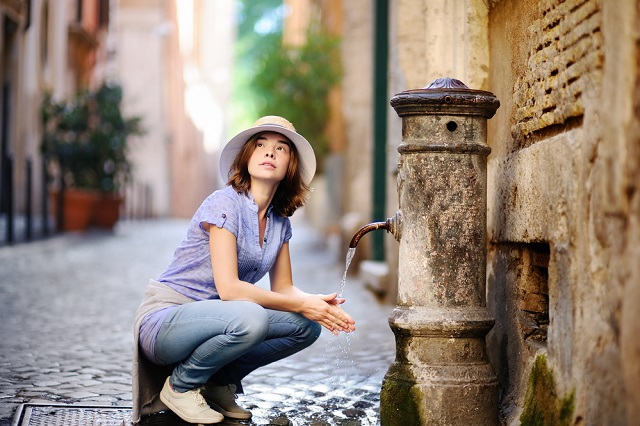 Rome is thought to be home to more public fountains than any other city in the world, counting over 2000, with 50 of them classed as 'monumental'. Fountains have adorned Rome's streets, parks, and piazzas for around 2,000 years, when they were connected to Ancient Roman aqueducts.

After falling into disrepair, the aqueducts were reconstructed and new fountains built during the 17th and 18th centuries. Many are adorned with sculptures of mythical figures and other embellishment, while others are simple cylindrical drinking fountains, given the nickname 'nasoni' (big noses) due to the shape of their protruding taps.

READ ALSO: The first 'wine fountain' just opened in Italy – and it's free

The decision to turn off the drinking fountains was announced on Thursday by Acea, the company which manages Rome's water, and the first 30 'nasoni' will be closed on Monday with more to follow throughout the summer period.

“We are well aware of the inconvenience that our initiative may cause,” said Acea's president Paolo Saccani, but added that the measure was “justified by the exceptional drought“. Almost all of Italy has experienced significantly less rainfall than usual this year, with northern regions Emilia Romagna and Tuscany declaring a regional state of emergency because of the water shortage.

After the second hottest spring in 60 years, and the driest in that same period, Italy has missed out on about a month's worth of rainfall, leaving lakes and reservoirs severely depleted.The below images, taken by NASA from space, show the visible effect of the drought.

Turning off Rome's fountains will also give Acea a chance to carry out much-needed improvement works on the piping, according to Saccani, who said old pipes would be replaced and leaks repaired throughout the city.

A report by environmental organization Legambiente warned earlier this week that almost half of the water pumped into Rome's fountains is wasted due to problems with the pipes which has turned the system into a “sieve”.

The organization's president, Roberto Scacchi, called for “specific and concrete actions” to be put in place to combat this waste, prompting Italy's Environment Minister to suggest turning off the drinking fountains.

The move has been criticized by consumer group Codacons, which argued that the closure would force tourists and locals to buy expensive bottled water from shops, and said that turning off the 'nasoni' wouldn't fix the problems of leaks within the pipes.

However, Acea stressed that the closure would be “temporary and partial”, with 85 fountains kept in operation.

The capital has already introduced regulations aimed at protecting its more elaborate fountains, banning picnicking tourists from some of the most famous examples, and hiking up fines for those who take an illegal dip in their tempting waters.

Earlier this year, two tourists were hit with a 900 euro fine for washing their feet in a Roman fountain, their arrest following that of an Italian who swam nude in the Trevi.

READ ALSO: How Italy plans to fight back against monument vandals