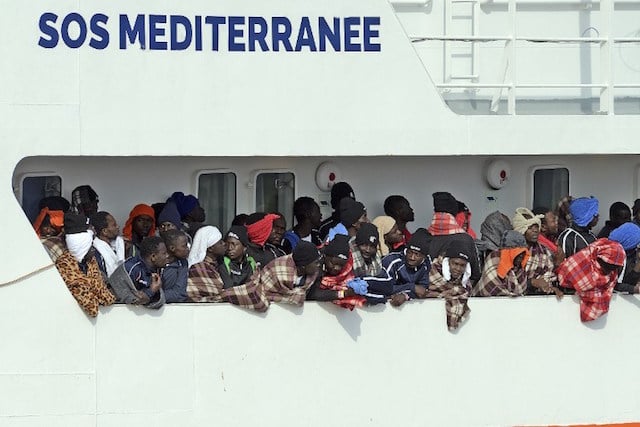 Would be immigrants wait to disembark in the port of Catania on Sicily on March 21st, 2017, following a rescue operation in the Mediterranean sea. Photo: Giovanni Isolino/AFP
“What is happening in front of our eyes in Italy is an unfolding tragedy,” Grandi said in a statement.
READ ALSO: The changing face of the Mediterranean migrant crisis
“In the course of last weekend, 12,600 migrants and refugees arrived on its shores, and an estimated 2,030 have lost their lives in the Mediterranean since the beginning of the year.”
He added: “Italy is playing its part in receiving those rescued and providing asylum to those in need of protection. These efforts must be continued and strengthened. But this cannot be an Italian problem alone.”
Separately, a source in Paris said the interior ministers of France, Germany and Italy will meet in the French capital on Sunday to discuss a “coordinated approach” to help Italy.
Faced with rising numbers of migrants risking the perilous sea crossing to reach Europe, Italy last week threatened to close its doors to people arriving on boats with foreign flags.
Europe had to get fully involved through an “urgent distribution system” of migrants and should widen legal channels so that migrants can be admitted, Grandi added.
He also called for greater international efforts to tackle the causes of the migration, protect people and fight trafficking.
READ ALSO: 54 dead, some 10,000 migrants rescued between Libya and Italy in 4 days
Since the beginning of the year, 83,650 people have reached Italy by sea, an increase of nearly 20 percent compared to the same period last year, according to UN figures.
Nearly all of Italy's 200,000 places for accommodating migrants have been filled.
Many of the migrants need health care and support, with a large percentage of them non-accompanied children and victims of sexual violence, says the UN.
The number of migrant children arriving on their own rose two-fold between 2015 and 2016, reaching 25,846 at the end of last year.