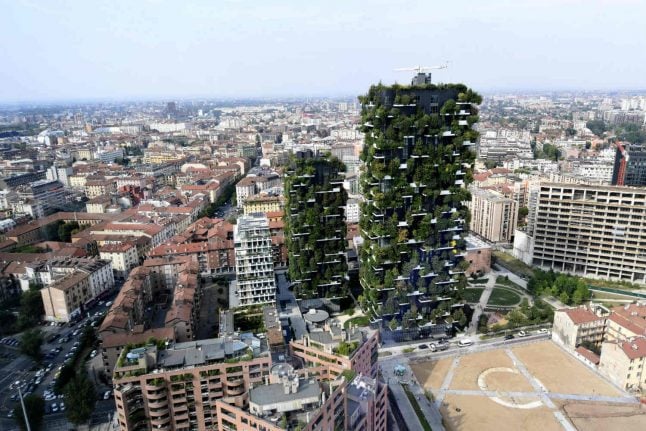 The brainchild of Milanese architect Stefano Boeri, the Bosco Verticale (Vertical Forest) uses more than 20,000 trees and plants to adorn the high-rise buildings from top to bottom – a project now being exported all over the world, from China to the Netherlands.

The two original leafy towers dominate the skyline in the northern Italian city, giving residents — including celebrities like footballer Ivan Perisic — an enviable view over the new district of Porta Nuova and beyond.

Cherry, apple and olive trees spill over balconies alongside beeches and larches, selected and positioned according to their resistance to wind and preference for sunlight or humidity.

Boeri said the idea came from his obsession with trees and determination to make them “an essential component of architecture,” particularly as a weapon to combat climate change.

“I was in Dubai in 2007 and I watched this city growing in the middle of the desert, with more than 200 glass towers multiplying the effect of heat,” he recalls.

He wanted instead to create something that “as well as welcoming life, can contribute to reducing pollution, because trees absorb microparticles and CO2”.

“Cities now produce about 75 percent of the CO2 present in the atmosphere. Bringing more trees into the city means fighting the enemy on the spot,” he said.

“It's a unique thing to live here, we're in direct contact with the plants while being in the city centre and in a super modern skyscraper,” says Simona Pizzi, who can see the mountains from her 14th floor apartment. “The plants have developed a lot over the past three years, and we see them changing with the seasons,” adds the proud owner of an apple tree, where the white flowers contrast magnificently with the green foliage.

Boeri worked closely with botanists to create a nursery of a thousand trees that have been trained to grow under specific conditions.

The team faced numerous challenges, from how the balconies should be structured to take the weight of the plants, to how to secure the tree roots and what needed to go into the soil.

They even carried out resistance tests at a hurricane centre in Miami.

“For every human being living in the building, there are about two trees, 10 shrubs and 40 plants,” Boeri said.

The vegetation soon transformed into a veritable wildlife park: 9,000 ladybirds brought over from Germany to eat parasites — to leave the plants pesticide free — multiplied over the space of a few weeks.

“The extraordinary thing that we did not expect was the incredible amount of birds that nested here. We have small hawks on the roofs, and swifts that had previously disappeared from Milan,” Boeri said.

The architect and his team are now working on a dozen or so Vertical Forest projects around the world, including Lausanne in Switzerland, Utrecht in the Netherlands, Sao Paolo in Brazil and Tirana in Albania.

The aim in Eindhoven in the Netherlands is to swap the sort of luxury pads seen in the Milan project — which go for some 11,000 euros ($12,900) per square metre — for social housing, a project Boeri says he's particularly keen on.

And because the cost of the trees is low, it's not an unreasonable ambition, he says.

He is also thinking big in China, where not only are two towers under construction in Nanjing and a hotel in the works in Shanghai, but there are plans for a “Forest City” of some 200 buildings in Liuzhou.

“China is now realising it faces the dramatic problem of air pollution, but also of uncontrolled urbanisation, with cities growing out of suburbs, creating megacities,” he said.

“Every year fifteen million peasants abandon the countryside to come to the city, we have to come up with some answers, with new green cities,” says Boeri, who took part in the COP21 conference on climate change in Paris in 2015.

The architect has not patented the Vertical Forest and has even written a book revealing the secrets and techniques behind it, which he hopes will encourage a new, greener way of developing cities.