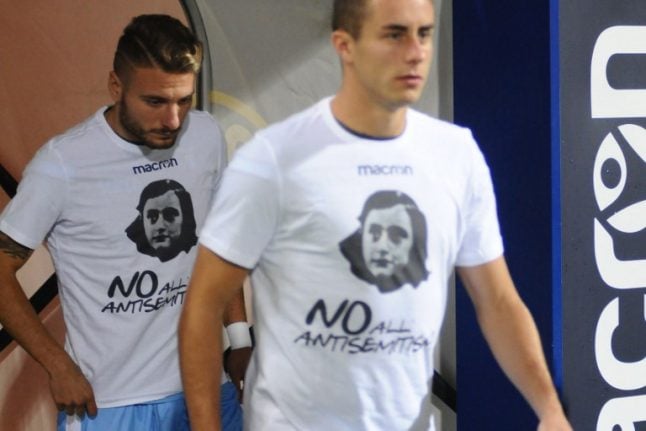 Isolated supporters sang the Fascist song “Me ne frego” (“I Don't Care”) in the stands of the Dall'Ara Stadium in Bologna.

The team's ultra Irriducibili fans boycotted the match, saying they didn't want to be part of the “media theatre” triggered when Lazio fans posted stickers showing Anne Frank wearing the colours of their arch rivals, Roma.

The act, for which at least 15 Lazio fans – including three minors – have been identified as responsible, prompted the Italian football federation to order all teams to take a stand against anti-Semitism.

On all pitches, captains and referees handed out copies of Italian-Jewish writer Primo Levi's memoir of deportation, If This Is A Man. Extracts were read from The Diary of Anne Frank before a minute of reflection on the Holocaust, which quickly turned into a minute of applause in most stadiums.

But in Turin, where champions Juventus were playing SPAL, a section of the crowd turned their backs on the pitch and sang the Italian national anthem, while at Rome, where AS Roma met Crotone, some fans drowned out the reading with chants in favour of their team.

Lazio president Claudio Lotito has been on damage control since the incident became public on Monday, visiting the Rome synagogue and announcing plans to take fans to visit Auschwitz. But a telephone recording made public on Wednesday cast doubt on his real intentions.

Il Messaggero published a recording in which Lotito appeared to describe the visit to the synagogue as “theatrics we have to do”.

“There's a vice-Rabbi? There is just the Rabbi? They are worthless. You see where we are? The Rabbi and vice-Rabbi in New York… Come on, let's do this theatrics,” a voice is heard saying.

Lotito said he would sue anyone who claimed that he had ever uttered such words and Democratic Party politician Dario Ginefra, seated beside Lotito on a Monday night flight from Milan to Rome where he was alleged to have made the call, backed the Lazio president. Meanwhile the Lazio president insisted it “would be wrong” to punish the club for “the behaviour of 15 idiots”.

Lazio had already been given a two-match closure of the north end of the Stadio Olimpico for racist chanting.

“It would be wrong for the team to be docked points as we'd become hostage to these people going to the stadium just to create chaos,” Lotito told Radio Capital.

Italian President Sergio Mattarella has asked Interior Minister Marco Minniti to ensure that those responsible will be identified and “permanently banned from stadiums”.

In Wednesday night's Serie A matches, Napoli reclaimed the top spot with a 3-2 win against Genoa. Juventus remain third a point behind Inter after a 4-1 win over SPAL in Turin, while Lazio shrugged off the controversy to remain joint third with the champions after a 2-1 win at Bologna.