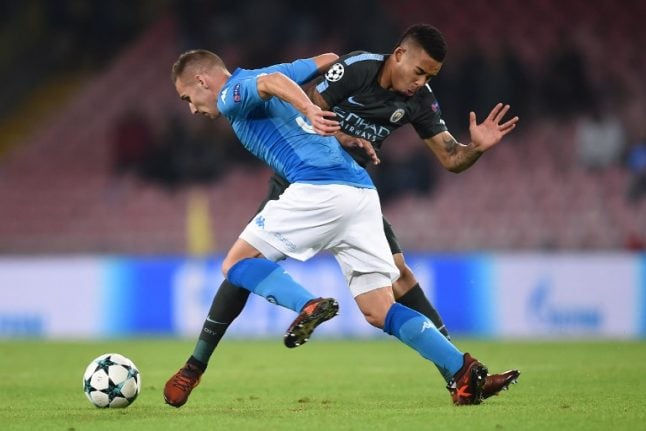 Algerian international Ghoulam could be out for months after tearing a cruciate ligament in his right knee during the 4-2 defeat which effectively ends Napoli's elite European challenge.

Maurizio Sarri's side – with 31 points after 11 games – travel to mid-table Chievo on Sunday looking to pull further ahead of rivals Inter Milan, who are just two points adrift and fresh after their absence from European football when they host northern Italian outfit Torino, who are in ninth.

But Ghoulam's absence should cause headaches for Sarri who will be forced to shuffle around Elseid Hysaj and Christian Maggio, or bring in Portuguese Mario Rui, who has played little in the past year.

“Right now [Ghoulam is] one of the best full-backs in Europe,” said Sarri. “He's an important player for us and it'll be difficult for us to replace him.” Champions Juventus, three points behind Napoli, can make up ground as they host tailenders Benevento, who have lost all their 11 games.

Massimiliano Allegri's side were held 1-1 in Champions League by Sporting Lisbon, but are still in the running for the last-16.

Despite their predicament Benevento forward Pietro Iemmello remains optimistic of staying in the top flight.

“It's a tough moment for everyone, the only way to react is to work and never give up,” said Iemmello.

“Last year's championship taught us that Crotone made a final sprint and saved more than 30 points. This year maybe we can do the same.”

Lazio, joint third with Juventus, host Udinese after maintaining their 100 percent Europa League record with a 1-0 win over Nice to move into the last 32.

“We are the only team in Europe to have won four out of four matches,” said coach Simone Inzaghi with pride as his side target a third Serie A title and first since 2000.

“The hardest is yet to come. We have to recover and regain energy for Udinese on Sunday. We have to continue to prove that we're not a fluke.

“The lads have shown me that with hard work and consistency, we can fight it out with anyone.

“We've been near the top of the table for a couple of years now, so we're not a fluke,” added Inzaghi, whose side are the only team to beat Juventus this season.

Meanwhile, the Roman club announced that their fans can again buy tickets for the south end at the Stadio Olympico where they posted photos of Holocaust victim Anne Frank in a Roma jersey two weeks ago.

Their own north end – in the stadium they share with Roma – had been closed following racist chants during a game against Sassuolo last month.

In fifth, Roma, boosted by their 3-0 Champions League win over Chelsea, travel to Fiorentina two places below them.

Roma have the meanest defence in Serie A with just five goals conceded, and Brazilian defender Juan Jesus said that confidence was riding high after their Chelsea rout.

“It could even have been 5-0. We respect Chelsea, but both the match in London [3-3] and Rome proved that we can beat anyone on our day.”

Seven-time European champions AC Milan, in the midst of a poor run of form in Serie A and sitting eighth, will be looking for some relief at struggling Sassuolo.

Under-fire manager Vincenzo Montella's difficulties will not have been helped by a 0-0 Europa League draw at AEK Athens despite the Italians remaining two points clear of their Greek hosts in Group D.