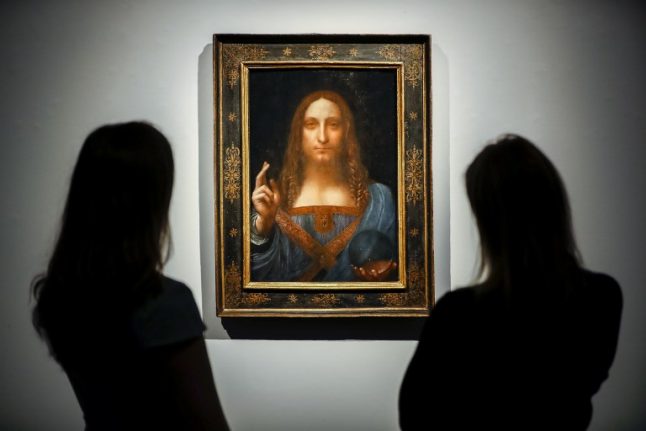 Salvator Mundi on display at Christie's New York, where the painting will be auctioned on November 15th. Photo: Tolga Akmen/AFP.

Salvator Mundi, Da Vinci’s long-lost painting of Christ, goes on auction in New York on Wednesday night – giving collectors a once-in-a-lifetime chance to buy one of the Renaissance genius’ works, all others of which are already owned by museums.

The 500-year-old painting is set to smash all auction records for an Old Master, with bids expected to top $100 million.

That almost certainly puts it out of reach for either the Italian state or any of Italy’s art museums, none of which have announced plans to bid for the work.

Salvator Mundi is currently owned by a Russian billionaire, Dmitry Rybolovlev, who bought it from a Swiss art dealer for $127.5 million in 2013.

The painting re-entered the art market in 2005, when some art experts acquired it for relative peanuts at a local auction in the United States. Heavily painted over and gnawed by worms, the work was unrecognizable until restoration revealed traces of Da Vinci’s trademark techniques. Christ’s delicately placed hand, the intricate curls of his hair and the haunting quality of his expression have led to comparisons with Da Vinci’s most famous portrait, the Mona Lisa.

Like that work, now a prized possession of the Louvre in Paris, Salvator Mundi seems destined to remain outside Italy.

It has never been exhibited in Da Vinci’s home country, having been commissioned by Louis XII of France and later sold to Charles I of England. It remained in the hands of English aristocrats until it made its way to the US in the 20th century.

Since its rediscovery, the work has been displayed at the National Gallery in London, as well as Christie’s auction houses in Hong Kong and the US.

Art lovers can nonetheless find numerous Da Vinci originals in Italy, including The Last Supper on the walls of the Santa Maria delle Grazie church in Milan, the Annunciation at the Uffizi Gallery in Florence and the Vitruvian Man in Venice’s Gallerie dell’Accademia – not to mention the farmhouse where the painter was born in the Tuscan town of Vinci.

Under export laws introduced to help keep Italy's artistic heritage in the country, any work created more than 70 years ago by an artist now deceased requires permission from the Italian state before it can be sold overseas.