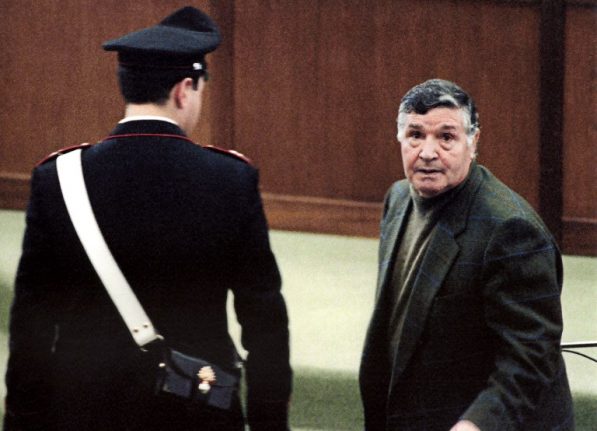 Salvatore "Totò" Riina at his trial in 1993. Photo: Alessandro Fucarini/AFP

“Boss of bosses” Riina, who was nicknamed “The Beast” because of his cruelty, led a reign of terror including the brutal daylight assassinations of anti-mafia judges Giovanni Falcone and Paolo Borsellino.

He died on Friday aged 87, just months after being caught on wiretaps in jail boasting afresh about his bloody crimes.

“Riina will go down in history as the man who destroyed Cosa Nostra,” mafia expert Attilio Bolzoni said.

“With his strategy of bloody massacres in Sicily and across Italy… he turned an invisible mafia visible, with hundreds, thousands of murders, carried out first with Kalashnikovs, then bombs.”

“For the first time in history, the state reacted mercilessly,” Bolzoni said, with the arrest of hundreds of bosses and the introduction of harsh anti-mafia laws that saw imprisoned gangsters held in utter isolation. Totò Riina after his arrest in 1993. Photo: Italian police handout/AFP

Caught and jailed in 1993 after nearly a quarter of a decade as a fugitive, Riina's revenge was swift: Cosa Nostra launched a series of bombings in Rome, Milan and Florence that killed 10 people.

But he was unable to stop the decimation of the crime group – once nicknamed “the octopus” for its tentacled reach into all areas of society – which was gradually supplanted by the Camorra in Naples and 'Ndrangheta in Calabria.

“It's infinitely less powerful than before. After the deaths of [boss Bernardo] Provenzano and Riina, the only one at liberty is being hunted by the police,” the head of Italy's national anti-mafia body, Maurizio De Lucia, told AFP.

Multi-murderer playboy Messina Denaro, one of the world's most-wanted men, is seen by many as Riina's natural heir but has been on the run since 1993.

“Cosa Nostra is a very strictly structured organization, similar to an absolute monarchy. While the king still lives, it's not possible to think of picking a successor,” De Lucia said.

“The question now is whether the organization is strong enough to identify and appoint an heir. Many of its bosses have been arrested, and enormous amounts of its patrimony has been seized” over the years, he said.

“We'll have to see whether Riina's death will lead to a new start – which I think unlikely – or whether it will be another step towards the crime group's demise,” he said. But prosecutor Ambrogio Cartosio, who spent 20 years in the DDA, Italy's organization of anti-mafia prosecutors, warned the days of shootouts and car bombs may be gone, but Cosa Nostra has been growing fat instead on political deals.

“We have greatly weakened the military apparatus of the mafia, the massacres are over, murders are rare. But the mafia has undergone a genetic modification,” Cartosio told AFP.

“The political sector has lent itself greatly to… [organized crime's] infiltration of the social fabric” and, as a consequence, “the mafia presence in the political sphere is much greater than before,” he said.

And the battle is not only against “the octopus” but also the Stidda, a rival group formed by former Cosa Nostra members during the Second Mafia War of the early 1980s.

“The mafia is less military, less bloody than before, but it's very efficient,” he said.

“We must not lower our guard,” Interior Minister Andrea Orlando said on Friday.

“Though it may be less noisy and bloody today, it is no less dangerous. The mafia knows how to adapt.”

Pietro Grasso, Italy's senate speaker and a former anti-mafia magistrate, also stressed that the battle is not over.

“Riina takes with him many mysteries that would have been essential in uncovering the facts about alliances, political links, internal and external mafia accomplices,” he said in a post on Facebook.

“But none of us must stop searching for the truth”.