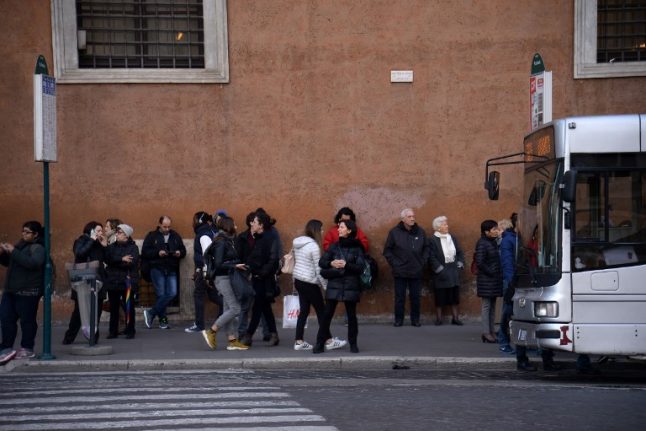 People board a bus in Rome. Photo: Filippo Monteforte/AFP

The man, reported to be unemployed and from Turin, was identified thanks to security camera footage of the attack, which took place on a number 63 bus last Friday morning.

The victim, a 15-year-old girl identified only as Giulia, was on her way to school at the time. She told La Stampa that the man kicked at her as soon as she got on the bus, hitting her in the knee, and told her: “Get out of my sight”.

She tried to move away, but the bus was too full. As he continued to verbally abuse her she put in her earphones and pretended not to hear him, she said, but finally he told her: “It’s pointless you going to school, you’ll only end up on the street. Go back to your country.”

Giulia – who was born in Italy, to a black father and white mother – said no one intervened.

Too frightened to respond, she went to school and in tears called her mother, who informed the teachers what had happened. Together they decided to report the attack to police, who began scouring camera footage and patrolling the bus route to search for the man responsible.

Prosecutors are considering charging him with racially motivated violence, which carries a maximum sentence of four years' imprisonment.

“There must be no space and no tolerance for racism,” Turin’s mayor, Chiara Appendino, wrote on Facebook about the attack. “The city of Turin stands by” Giulia, she said.

Racist incidents have risen in Italy in recent years, according to reports.

In the past six months alone, a pregnant woman from Senegal was beaten up on a bus in Rimini, while again in Turin, an Italian girl said she was turned down for a retail assistant role because the shopkeeper objected to the fact her boyfriend is of African origin, and in Verona, an Italian woman of Ghanian heritage was told she could not enter a festival by an organiser because she was not a “true” Italian.