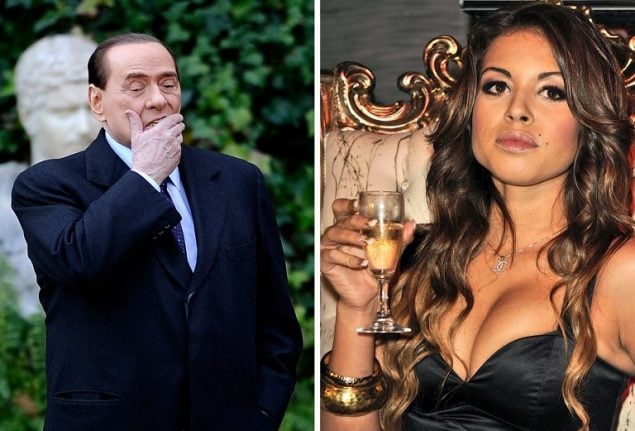 Silvio Berlusconi and Karima El-Mahroug, the woman he was charged with paying for sex when she was 17. Photo: Filippo Monteforte/Giuseppe Aresu/AFP

The ruling is the latest chapter in the scandal involving Karima El-Mahroug – known as Ruby the Heart Stealer – who the veteran politician was accused of paying for sex.

After being convicted in 2013, he was cleared of all charges in 2015. Mahroug was 17 at the time of the alleged offence.

But a court in Siena said Berlusconi should be tried over purported payments to Danilo Mariani, a pianist who played during the parties at the politician's house near Milan.

A first hearing is to take place in Siena on February 1st 2018, reports said, with Berlusconi accused of paying Mariani to lie at his original trial.

The case is a setback for Berlusconi, now 81, who is seeking another political comeback.

Ahead of a general election set to be held before May next year, the billionaire four-time premier has taken a case to the European Court of Human Rights, asking it to annul a ban on him holding elected office.

He is hoping the court in the French city of Strasbourg will rule against a six-year ban imposed over his 2012 conviction for tax fraud.

Milan prosecutors on Wednesday requested six years in jail for the 85-year-old for allegedly paying guests to lie about the parties in the third instalment of the so-called ‘Ruby’ affair, named after the underage exotic dancer at the centre of the case.

Berlusconi denies wrongdoing, and even if convicted has little chance of going to jail due to a long appeals process and restrictions against imprisoning the elderly.

Around 20 former guests of the infamous parties at Berlusconi’s mansion near Milan are also on trial, accused of accepting money and gifts from the media mogul in return for their silence.

Young women who attended would later describe the events as sex parties, but Berlusconi always insisted they were nothing more than elegant, “convivial” dinners.

“These young women were assured that they would be OK both in terms of income, with a 2,500-euro ($2,677) monthly payment, and for a roof, a house, accommodation,” prosecutor Luca Gaglio told the court in his summing up on Wednesday.

Berlusconi’s lawyers insist payments amounting to millions of euros were compensation for the reputational damage suffered by the women from the scandal.

The former prime minister is among 29 people accused in the trial, including Karima El-Mahroug, the Moroccan teenager and dancer who used the name “Ruby”, for whom prosecutors asked for five years in jail.

The verdict is expected in the autumn.

The investigations date back to El-Mahroug’s arrest for theft in 2010 – and Berlusconi’s intervention for police to release her.

He was sentenced to seven years in prison in 2013 for paying for sex with El-Mahroug, but the verdict was overturned on appeal after the judge said there was reasonable doubt he knew she was underage. 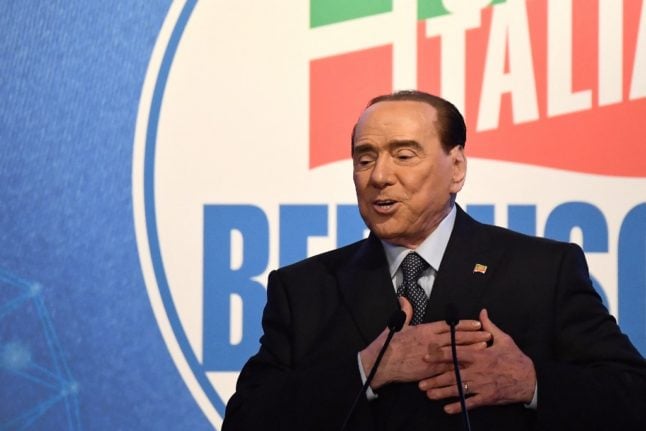 Former Italian Prime Minister and leader of the Forza Italia party Silvio Berlusconi during a rally in Rome on March 9, 2022. Photo by FILIPPO MONTEFORTE / AFP

The Ruby-ter (Ruby Three) trials are spread out across several Italian cities, including in Siena, where Berlusconi was cleared last October of bribing a piano player to lie about the parties.

Berlusconi and his allies have long claimed the extensive legal proceedings against him in recent decades – he claimed in 2021 he had gone through 86 trials – are politically motivated.

He has never spent any time behind bars but in 2013, with his first definitive conviction for tax fraud, he carried out community service in a care home for Alzheimer’s patients.

Berlusconi was prime minister three times between 1994 and 2011 and remains active in politics, although his career is reaching its twilight.

He most recently made headlines with a failed bid to become president in January.

His Forza Italia party is part of Prime Minister Mario Draghi’s coalition government but is languishing in the polls.

He has also been plagued by health problems, saying he almost died after being hospitalised with coronavirus in September 2020.

After recovering in hospital, he famously told reporters: “Once again, I got away with it”.

Last year, he was again hospitalised in Milan and Monaco, reportedly due to problems with his heart, a fall at home, and the after-effects of Covid.