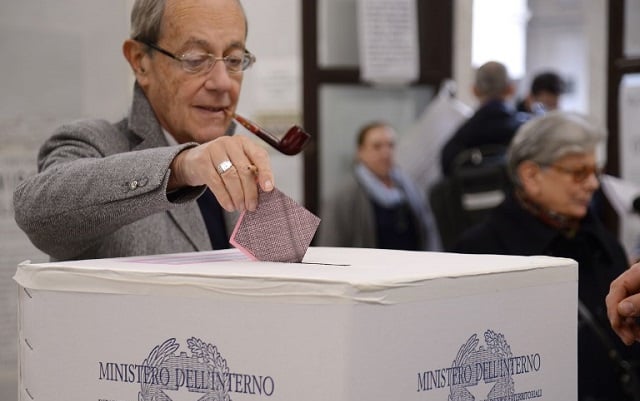 The election is set to take place on March 4th, after parliament was dissolved shortly before New Year.

That's a Sunday, as is usual in Italy, to allow the largest proportion of eligible voters to cast their ballots. Italian President Sergio Mattarella, the man whose job it is to call the next election. Photo: Jussi Nukari / Lehtikuva / AFP

Under Italian law, the election had to be held before May 20th, but most of the country's parties have pushed to hold them as soon as possible.

There's a good reason elections haven't been held already, and it also explains why this election is particularly unpredictable. It's all to do with Italy's new electoral law.

Paolo Gentiloni was described as a 'caretaker' prime minister when he took over the top job last year, but in December he completed a year in the job. He replaced party colleague Matteo Renzi, who resigned after staking his job on a set of constitutional reforms which were rejected in a humiliating national referendum.

This wasn't just a problem for Renzi, but for the country's political system. Renzi is pictured during a press conference. Photo: Andreas Solaro/AFP

The suggested reforms would have ironed out differences in the electoral systems for Italy's upper and lower houses of parliament. But the proposals faced criticism from several quarters as being too drastic, and some saw the vote as an opportunity to express dissatisfaction with the political establishment as a whole, and so when they were rejected, Italy was left with no workable electoral law.

After months of debate, a new election law named 'Rosatellum' was finally passed in late October, despite fierce opposition from the Five Star Movement (M5S). One crucial feature of the new law is that it favours parties which build alliances, something the M5S has ruled out doing. The party has accused the new law of being “rigged” against it.

Because this law is brand new for Italy, predictions are even tougher than usual — and it could lead to some surprises.

With a month to go, the M5S looks on track to be the most popular party.

In the graph below, which tracks opinion polls from 2013 to January 2018, the Democratic Party is marked in red, the M5S in yellow, Berlusconi's Forza Italia in light blue, and the Northern League in green. The other colours represent Italy's smaller parties, which could prove decisive when it comes to forming coalitions or a government. As well as opinion polls, regional and local elections in recent months have served as a barometer of public mood.

A centre-right, Berlusconi-backed candidate scooped just under 40 percent of the vote in Sicily's regional elections in November, while the Democratic Party candidate polled just 18.6 percent. But turnout was low, with fewer than half of the eligible voters casting their ballots.

And when ten million Italians had the chance to go to the polls in regional elections across the country in June, the centre-right were again the biggest winners, while the Democratic Party lost control of several longtime left-wing strongholds. But the M5S also failed to do as well as predicted, and again turnout was low, suggesting that protest voters may have chosen to stay home rather than back the anti-establishment party.

4. The overall outcome is anyone's guess

Because of the way the electoral law favours coalitions, and the fact that no party looks set to receive 40 percent of votes outright, it's extremely tough to predict who will be ruling Italy this time next year.

In the final polls before the election, Silvio Berlusconi's right-wing coalition was in the lead but predicted to fall short of an absolute majority. Meanwhile, a large chunk of the electorate hadn't yet made up their minds who to vote for. A centre-right victory would be a huge boost for ex-PM Silvio Berlusconi, pictured at a rally. Photo: Andreas Solaro/AFP

READ ALSO: There's an election in Italy next year, and the M5S has some familiar problems

5. Risks and factors to look out for

The M5S, which has had a reputation for eurosceptism, polling as the largest single party, global media have raised the possibility of an 'Italexit' or Italy quitting the euro. However, the party refused to join a coalition before the vote, and were polling at 27.8 percent, some way from the 40 percent majority, in the final polls.

What's more, the M5S has increasingly softened its stance on the EU and euro, with the party's new leader recently stressing: “We want to stay in the EU.” The leader of Berlusconi's junior coalition ally, Matteo Salvini, has been the most vocal critic of the EU, but Berlusconi has repeatedly stated that the coalition would not seek a referendum on the euro.

The biggest risk facing Italy is further instability, or in other words, no government being formed and another election held later next year.

Employers' organization Confindustria warned in December that instability could threaten Italy's economic recovery and warned political parties not to use “demagogic measures”, saying the election was “very important”.

READ ALSO: Italian government debt is a 'cause for concern': EU