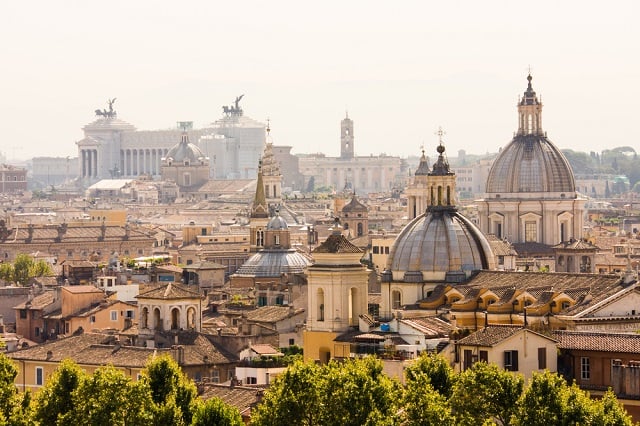 Here's everything you need to know about Italy's 2018 election, and if you want to start from the very beginning, here are ten key things to know about the Italian political system.

Just to keep things interesting, this election is taking place using a brand new, never before tested electoral law. Here's how it works.

Brush up on your Italian politics vocabulary with our list of key Italian words and phrases to brush up on to understand the election.

And take a look at what each of the parties has promised the electorate in their bid to come out on top: These are the promises Italy's political parties have made to voters. After that, see how Italians took to social media to parody some of the more outlandish pledges. And see how if the sums add up with this explainer: Do the numbers add up for Italy's political campaign pledges?

What will happen after the election is anyone's guess, but take a look at some of the possible post-vote scenarios here. A woman looks at the board bearing the parties' logos. Photo: Filippo Monteforte/AFP

There are four major parties in Italy (each polling at above ten percent of the vote). Here are our cheat sheets to help you get to grips with their origins, ideology, and major players:

But it's not all apart the big parties. Italy's political system favours coalitions, so the country's many smaller parties can play pivotal roles. Here's an introduction to Italy's small political parties. There's an enormous cast of characters in this year's election. These are the main faces you'll need to know.

For in-depth profiles of the main parties' leaders, click the links below: Go beyond the headlines and explore the deeper issues in the election with our in-depth features: In the run-up to voting day, we've brought you daily recaps of the who, what, and why of Italian politics. Need a catch-up? Here are the recaps in chronological order, or you can browse through them all here.

A museum, Masons, and missing millions: Giorgia Meloni, leader of the far-right Brothers of Italy, led a protest outside Turin's Egyptian Museum over a discount it offered for Arabic speakers. Meanwhile, one M5S candidate was revealed to have links to the Freemasons, while others were found to have pocketed up to €1 million that was meant to be set aside for small businesses.

Five Star problems, surreal debates, and a Berlusconi burn: President of the Lower House Laura Boldrini went up against Matteo Salvini of the Northern League in the first TV debate of the campaign, Meloni was attacked while on the campaign trail, and Berlusconi revived old plans for a bridge to Sicily.

Candidate chatter, a Roman ransom, and half of Five Stars: The M5S proposed that all parties should agree to halve lawmakers' salaries in the next parliament, and Berlusconi claimed: “Nothing can change in the next two weeks.”

Polls, protesters, and populism: We looked at the results of the last official opinion polls, Matteo Renzi begged the other PM candidates to talk to him in a TV debate, Salvini took his campaign south, and the M5S threatened to sue its candidates who were linked to the Freemasons. A dapper Italian casting his vote in a previous election. Photo: AFP

A weekend of protests: There were more protests and clashes as far-right fringe parties attempted to hold rallies in Naples and Venice on Sunday, and elsewhere PM Paolo Gentiloni promised to exempt over-75's from the TV licence fee.

An election emoji: The election got its own emoji, a stinky rubbish scandal rumbled on in Campania, and Health Minister Beatrice Lorenzin claimed ballot papers made it too confusing to vote.

The campaign turns violent: After a week of tense rallies, two political activists were attacked while campaigning: an extreme-right leader was bound and beaten in a brutal assault in Palermo, and another campaigner was stabbed in Perugia.

Italy's latest candidate for prime minister is a real clown: British comedian John Oliver, who hosts a satirical news show on US TV, threw his hat into the ring – because “yes, Italy, my candidacy for prime minister may be a complete and total farce, but be honest: incredibly, I am far from your worst option”.

Who needs an election when you've got snow? As the snow distracted many of us from the pending vote, we looked at Berlusconi's latest hinting at his PM candidate, and criticism of the League from none other than one of the party's most senior members.

The campaign goes down the toilet: One centre-right candidate shot a video of himself on the toilet, in which he described M5S leader Di Maio as a laxative. Elsewhere, we looked at why Italians won't get to put their ballots in the ballot box.