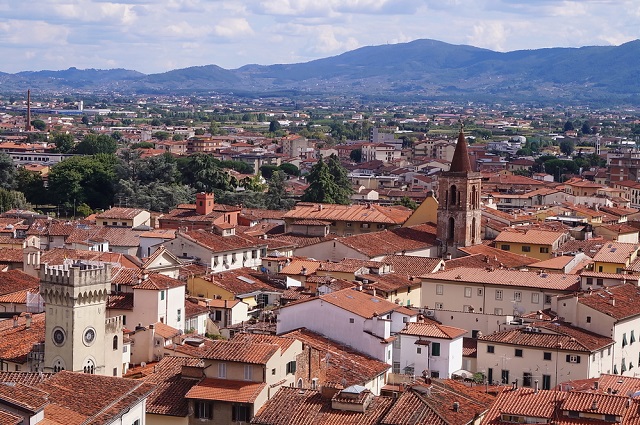 An aerial view over Pistoia in Tuscany. Photo: sansa55/Depositphotos

The tough new rules were set out by the city council on Monday, and apply to the entire historic centre of the medieval city.

New shop signs and window decals may not be neon, and “must be composed of the Latin alphabet's own characters, except for texts translated for communication with tourists,” the regulation states. And that's not all: new businesses will have to submit an application outlining “the aesthetic impact of the business on the historical context” of the city centre before being approved.

Furnishings must also comply with the council's quality standards, including a minimum of two metres of space between food preparation and the street.

“Our intention is to safeguard the historical centre, because we are convinced that this authenticity must be protected in order to avoid discrediting the area,” mayor Alessandro Tomasi said in a statement from the council.

“Tourists who come to Pistoia don't come to have lunch in a kebab shop, to see a money transfer shop, nor to buy a canned drink from a 24/7 vending machine.”

The regulation signed on Monday comes just a few weeks after a separate ordinance made the city centre a restricted traffic zone.

The council has also banned the opening of any new night clubs, betting shops, money transfer services, sex shops (known as 'sexy shop' in Italian), vending machines, or fast food stores in the protected area. And laws on the sale of alcohol have been toughened up, meaning that glass bottles of alcohol will not be sold for outdoor consumption at nighttime.

Meanwhile, all eateries must offer an accessible bathroom, regardless of the size of the premises.

Pistoia is not the first Italian city to clamp down on fast food businesses in its centre, as many of the country's most loved areas struggle to reconcile mass tourism with the need to protect their own heritage and maintain the city's liveability.

Tourist hotspot Venice introduced a similar ban on new fast food shops in 2017, one of several measures taken in an effort to combat the negative effects of tourism on local businesses in the lagoon city.

And locals and authorities in Florence campaigned successfully against the planned opening of a McDonalds restaurant in the city's historic centre, which is a Unesco World Heritage site.