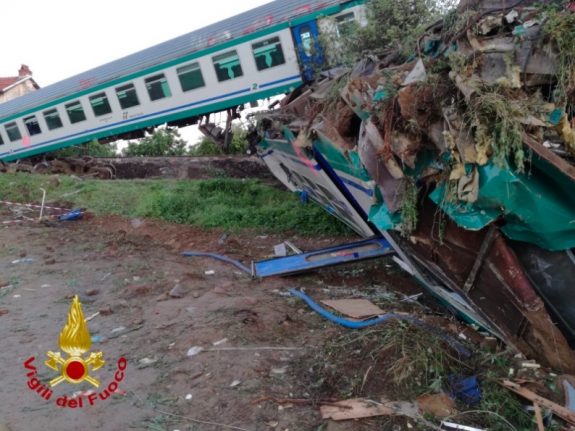 The site of the train crash in Caluso, near Turin. Photo: Vigili del Fuoco/Twitter

After the accident in Caluso late on Wednesday night, emergency services rushed to free passengers trapped in carriages that had derailed and overturned.

It had hit a truck that became stuck at a level crossing, smashing into the trailer but leaving the cab intact. Around 40 to 50 people were onboard the regional train, which was the last service of the night heading north out of Turin.

The train driver was dead by the time rescuers arrived, reports said.

The most seriously injured were taken to hospital by helicopter, including one man who later died of his injuries.

The Red Cross treated other victims at the scene.

By Thursday morning, the victims had been evacuated and authorities were investigating the site for clues as to what caused the crash. The Fire Service's photos showed the force of the impact, which left parts of the train crushed.

Investigators are studying whether the truck driver, who survived, might have made an error that led to the tragedy. TRAIN TRAVEL
‘Something always goes wrong’: What I learned taking the train through Europe with two kids

TRAVEL NEWS
OPINION: Trains are in fashion so why is rail travel across Europe still so difficult?
Url copied to clipboard!