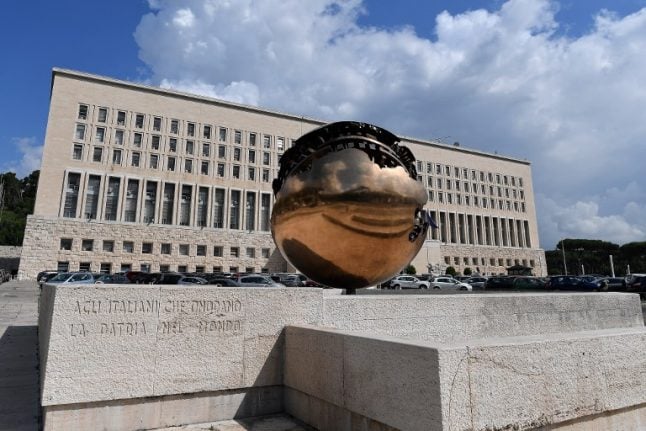 Italy's Foreign Ministry in Rome, where the French ambassador was summoned after a diplomatic spat over a stranded migrant ship. Photo: Tiziana Fabi/AFP

The migrants saved by the Aquarius, run by French NGO SOS Méditerranée, were stuck on the overloaded ship for over 30 hours as Italy and Malta bickered over who should take them, before Spain stepped in and offered the port in Valencia as a place for the migrants to land in Europe.

The accusation by Paris that Rome acted irresponsibly is “compromising relations between Italy and France”, Milanesi said after summoning French ambassador Christian Masset for a meeting on Wednesday morning.

French President Emmanuel Macron is due to receive Italian Prime Minister Giuseppe Conte on Friday, though the meeting has been jeopardized by the ongoing war of words. Meanwhile Finance Minister Giovanni Tria announced that he would cancel an official visit to Paris, though his French counterpart Bruno Le Maire later said the two had agreed to reschedule their talks.

Italy's deputy prime minister called for an official apology before any further summits. In a speech to the senate on Wednesday, Matteo Salvini – who is also Italy's interior minister and head of the nationalist League party – said that France had only taken in 640 of the more than 9,000 people it had promised to take from Italy. He also said that in the five months to the end of May this year France had sent back to Italy 10,249 migrants who had crossed their common border.

“Our history of solidarity, humanity and welcoming spirit does not deserve to be criticized by members of the French government,” he said. The French foreign ministry responded that Paris was “perfectly aware of the weight of migratory pressure on Italy and the efforts of this country”.

“Nothing said by France has questioned this, nor the need to coordinate closely among Europeans,” a spokesperson said.

Italy's new populist government had earlier said that it would not “accept hypocritical lessons from countries that have preferred to look the other way on immigration”.

“The Italian government has never abandoned the almost 700 people aboard the Aquarius,” it said in a statement on Tuesday. “After the refusal of Malta to allow the people aboard the Aquarius to disembark there, we received an unprecedented gesture of solidarity from Spain. The same cannot be said of France, which has often adopted much more rigid and cynical immigration policies.”

Luigi Di Maio, leader of the Five Star Movement (M5S) that makes up Italy's new government alongside the League, minister of labour and, with Salvini, joint deputy prime minister, said that it was “embarrassing” that France “preached to us” as Italy is asking its European partners to share duties with Italy.

“I'm pleased that they [France] have discovered responsibility. Let them open their ports and if they want we can send them a few people,” he told reporters on Tuesday.

But there was also criticism from Spain, despite its gesture of solidarity. Justice Minister Dolores Delgado said that Italy may have violated international humanitarian law, while Ximo Puig, president of the Valencia region, commented: “Turning this into a political weapon is despicable… it is clear that Europe must act more wisely, but we cannot let these people die at sea.” Italy's actions won praise, however, from the leaders of Hungary and Slovakia, two EU members that have fiercely resisted hosting asylum seekers.

“Finally!” said Hungary's anti-immigration Prime Minister Viktor Orban said at a meeting with his Slovak counterpart Peter Pellegrini on Tuesday. “We assure the Italian government of our complete support,” he said, adding that he hoped Italy's stance “can bring a change to Europe's migration policy”.

Yet Slovakia's premier insisted that “we refuse to let migrants enter our country”, a stance that could bring him into conflict with Italy's new leaders, who have called for the automatic, compulsory resettlement of migrants across all EU countries.

The M5S-League government says that current EU rules, which require migrants to seek asylum wherever in Europe they first arrive, leave Italy and its southern neighbours bearing the brunt of mass migration across the Mediterranean.

It has found hardline allies in Germany and Austria, with the latter saying on Wednesday that the three governments aimed for “very sensible cooperation that will contribute to reducing illegal migration to Europe”.

The Aquarius is currently sailing for Valencia escorted by two Italian vessels, the Dattilo and Orione, which between them took on board more than 500 of the people rescued for the remainder of the 1,500-km journey after SOS Méditerranée said it was not safe for the Aquarius to continue unassisted.