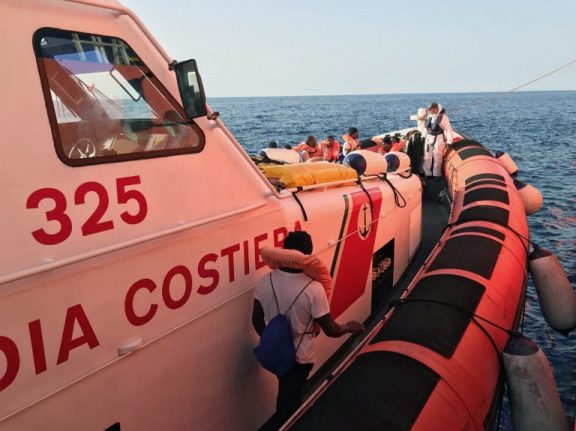 The ship, escorted by two Italian vessels, is not expected to dock on the Italian island as it continues its journey to Valencia, Spain, where authorities have offered safe harbour for the 629 people the boat rescued from the Mediterranean last weekend.

They have not set foot on land since then, after both of the closest countries, Italy and Malta, refused them entry. With several days' sailing to go before they reach the Spanish coast, worsening weather and many onboard suffering from sea sickness, the Italian coastguard ship leading the convoy decided to direct the boats closer to land.

The convoy will now proceed between Sardinia and mainland Italy, “to shelter from the weather that is otherwise unbearable for the people aboard, who are exhausted, suffering from shock and sea sick,” the French NGO that operates the Aquarius, SOS Méditerranée.

Earlier, the rescue group had reported strong winds and waves of more than four metres that left many passengers unwell after four days at sea.

Since Tuesday, the passengers have been divided between the Aquarius, the coastguard boat Dattilo and a ship that belongs to the Italian military.

The Italian coastguard is responsible for conducting those rescued to shore since it coordinated the multiple rescue operations that brought them aboard the Aquarius, an SOS Méditerranée spokesperson told The Local.

The convoy made a stop near Sicily on Wednesday to pick up more supplies, the NGO said.