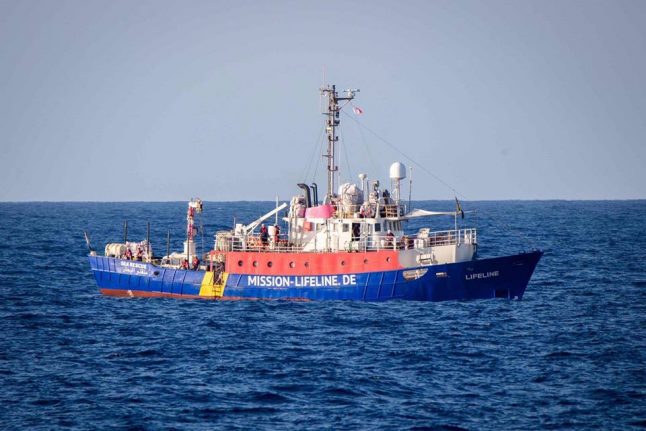 Lifeline, run by the German NGO Mission Lifeline. Photo: Mission Lifeline
The new rightwing and anti-immigrant Italian government last week banned the French NGO operated vessel the Aquarius, with more than 600 rescued migrants on board, from docking in Italy, causing uproar and a sharp spat with France.
Spain subsequently offered to take the Aquarius and it is expected at the port of Valencia on Sunday.
Salvini showed no sign Saturday of softening his position.
“While the Aquarius is sailing towards Spain, two other Dutch NGO operated vessels (Lifeline and Seefuchs) have arrived off the Libyan coast, to wait for their human cargos once the people smugglers abandon them,” Salvini said in a Facebook post.
“These people should know that Italy no longer wants to be any part of this business of clandestine immigration and they will have to look for other ports to go to,” he said.
“As minister and as a father, I take this action for the benefit of all,” he added.
After Rome's decision to ban the Aquarius, French President Emmanuel Macron and Italian Prime Minister Giuseppe Conte met on Friday and agreed that the EU should set up asylum processing centres in Africa to prevent “voyages of death.”
At their meeting in Paris, Macron and Conte also demanded “profound” changes to the EU's asylum rules which put the migrant burden on their port of entry to Europe — mainly Italy and Greece.