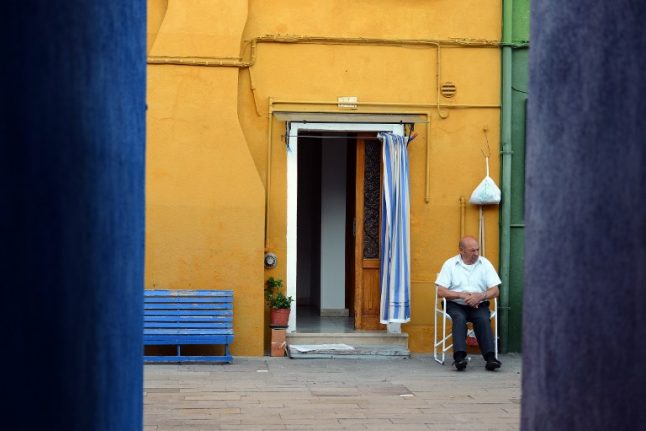 Some 464,000 births were registered in Italy last year – the lowest on record, ever.

With around eight births per 1,000 inhabitants, Italy's birth rate is getting alarming low, according to Francesco Scalone, a demographer at the University of Bologna.

“If Italians don’t start having more babies, you have to wonder what Italy will look like in the next few decades,” he said.

Declining fertility rates, combined with longer life expectancy, has also left Italy with a significantly older population. Its median age is 45.9 years compared to the EU’s median of 42.8, higher than any other European country except Germany.

Population forecasts predict 27 percent of Italians will be aged over 64 by 2030, compared to just 18 percent at the start of the century. By contrast, the share of population aged between 25 and 44 decreased from 30.6 to 26.3 percent in the last 15 years.

The shrinking of the working-age population is threatening the sustainability of the country’s pension system. Total pension expenditure is already the second highest in the EU, at 16.5 percent of GDP.

According to Italy's Ministry of the Economy and Finance, the demographic old-age dependency ratio – the number of people aged 65 or above, as a percentage of the number aged 15-64 – is increasing rapidly in Italy. The ministry predicts it will jump from just under 34 percent in 2015 to more than 60 percent by 2070.

READ ALSO: This is what Italy's population will look like in 50 years “This is a big demographic problem of the future. This older population who now has a longer life expectancy will need more medical care and that will create more economic problems because there are not enough young people to pay pensions and elderly care,” said Scalone.

“You can already see how it goes. More economic problems, less couples have kids, and it snowballs and where does it stop?

“There’s a lack of workforce of people paying taxes to pay pensions and then there’s also the family problem. Because we have a family with older people and nobody to take care of them.”

'We can't afford to have a family'

The problem is not that Italian women don’t want kids. In fact, the average Italian woman wants to have two or more children, according to Istat. So why don’t they?

“Getting a good job is difficult at the moment and the economy doesn’t work in favour of mothers, so for me it’s about the money,” said Stephania Aquilla.

The 31-year-old works full-time as a seamstress, but her partner is only employed periodically. The couple sometimes survives solely on her scanty salary.

“It’s difficult because the government doesn’t really help us with the cost of childcare or anything like that, so financially we need to be ready to have a baby and we’re not,” she said.

“It’s the reality for many Italians: it’s not because we want to party, but because we can’t afford it.”

The average age women at which have their first child in Italy is 31 years old – the oldest in the EU, Eurostat figures reveal.

According to Scalone, young Italians are increasingly forfeiting children for economic survival.

“It’s more difficult to find a permanent job necessary to accumulate the resources one needs for marriage and the mortgage. Because the younger generations are mostly on temporary contracts they find it hard to get ahead, borrow money or plan for any long-term future,” he said.

READ ALSO: Why Italy's 'mammoni' will keep staying with mamma While unemployment figures have steadily declined in recent years, youth unemployment is still at an alarming 33 percent, forcing many young Italians to live at home into their late 20s and 30s or to move abroad to work.

What’s more, only 40 percent of Italy’s workforce is female, one of the lowest rates of any developed country in the world. Working women face the added fear of being made redundant after childbirth. Among Italian women in employment when they become pregnant, one in four loses her job within a year of giving birth, according to Istat – and the risk increases with each child.

The lack of affordable housing, especially in the south, also deters would-be parents, since unlike some other European countries, Italy doesn’t have comprehensive child benefit schemes.

The previous government introduced financial incentives to encourage couples to conceive, including an €80 monthly “baby bonus” for low-income families and new mothers, but critics said the payout did little to address underlying problems. It's unclear whether the scheme will continue under Italy's new governing coalition. The lack of childcare options is another root cause of Italy’s declining fertility rate. One in two Italian families regularly use grandparents as babysitters, with 20 percent providing almost daily care. Those who don’t have this luxury are left with overcrowded, state-subsidized pre-schools, or find themselves paying for expensive private care.

None of these problems are easily tackled.

“There’s a problem in the problem – the low fertility rates started in Italy in the '70s and '80s,” says Scalone. “So you already have the number of potential mothers already declining, then fertility rates will decline further unless there is a sharp reverse in birth rates.”

'Not dying, but changing'

The demographic crisis could see Italy’s population drop by 7 million over the next 50 years, according to Istat, but controlled immigration could help prop up fertility rates.

Five million foreigners legally reside in the country, accounting for 8.3 percent of its population of 60.5 million. Another 690,000 migrants are estimated to have arrived in Italy by boat since 2013.

While surveys suggest that most Italians believe there are “too many immigrants” in their country and fear that immigration will negatively affect the economy, legal newcomers from outside the EU already pay enough social security contributions to fund the pensions of 600,000 retired Italians. The figure could rise exponentially if more migrants were permitted to work legally. As younger Italians continue to move abroad to find work, immigrants and asylum-seekers could make up a new tax-paying workforce to supply the welfare system, as well as caring for Italy's ageing population.

The majority of professional caregivers in Italy – 80 percent of them, by some estimates – are foreign nationals.

“In cities like in Bologna this phenomenon happened in advance, so the population is quite old and then immigrants from Ukraine, Moldovia and Eastern Europe, mainly women, work as caregivers,” said Scalone.

“I don’t believe Italians will disappear, but they will change, they will integrate the immigrants and after some generations the immigrants themselves will speak Italian, there will be more inter-marriages and so on.

“Maybe Italy is not dying, but merely changing.”