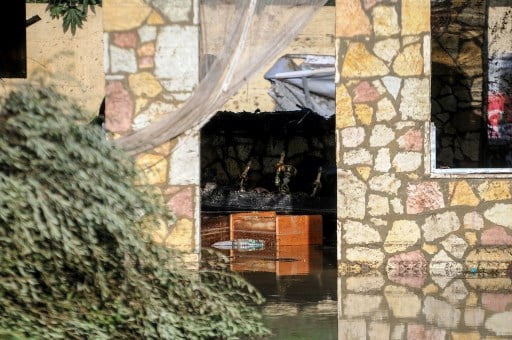 The illegally-built house where nine members of the same family lost their lives in flooding. Photo: AFP/Alessandro Fucarini

Devastating floods in Sicily, in which an entire family died when their house was engulfed in water, have sparked anger over the country's vast illegal housing problem.

Rains and winds continue to batter the north, while a shell-shocked Sicily prepares to bury its dead today, after a week of violent storms which took over 30 lives across the country.

Nine members of a single family, including children aged one, three and 15, drowned after a river burst its banks in the coastal town of Casteldaccia, submerging their rented villa in water and mud.

Survivor Giuseppe Giordano, 35, who had left the house on an errand with one of his children, lost his wife, two other children, his parents, brother, and sister, his nephew and the boy's grandmother.

One-year-old Rachele Giordana's open coffin was being watched over by grieving family friends in a church in Palermo.

A mass funeral for the family is set to take place in the city's cathedral today.

The deaths sent shockwaves through Italy, leading to widespread criticism of lax laws that have led to huge numbers of houses being illegally built in Italy.

The flooded villa in Sicily was known to have been built too close to the river, violating safety rules. Its owners had been ordered to demolish it in 2008, but were in the process of appealing, according to Sicilian prosecutor Ambrogio Cartosio.

“It's easier to sentence a mafioso to live in jail than to knock down a house,” Cartosio said, calling for a special fund from the state to pay for demolitions. All 12 villas built on the plain near Casteldaccia are unauthorised, but residents say they know to leave when the rains come.

The villa's owner, Antonino Pace, told La Repubblica the house had flooded 10 years ago, destroying everything he owned. He moved away, but was loathe to bulldoze the villa and let the Giordanos use it for free instead, he said.

“I warned them only to go in summer. There was a red weather alert on Saturday, everyone knew that,” he added.

But Giuseppe Giordano's cousin told media the villa had been rented to them by Pace, and that he had not warned them.

Out of every 100 new builds in Italy, almost 20 are illegal, according to the national statistics institute (ISTAT).

While unauthorised construction stands at 6.7 percent in the north, it rises to 19 percent in central Italy and shoots up to 47 percent in southern Italy, meaning almost one in every two houses there are illegally built.

In the Campania region, a jaw-dropping 64 percent of buildings are thrown up without planning permission.

“If the owner does not comply with the demolition order, the council is obliged to buy the property or knock it down, but often — as in the case of Casteldaccia — it doesn't have the funds,” he said.

He rubbished the idea that demolitions would leave people homeless, saying many of the properties were holiday lets.

“How many deaths and how many tragedies do there have to be before we realise that the only real public works needed in our country are those to make our territories safe?” said Stefano Ciagani, head of Italy's environmentalist lobby Legambiente. Giuseppe Giordano, whose family were killed in the floods in Sicily this weekend (centre) outside the morgue in Casteldaccia. Photo: AFP/Alessandro Fucarini

“We've been saying it for 40 years. Houses are built on riverbeds, because in Italy there's always an amnesty around the corner.”

“Sadly, every tragedy we have to put up with crocodile tears from those who turned a blind eye and favoured illegal construction,” he said.Italy's anti-establishment Five Star party (M5S), which is governing in a coalition with the far-right League, pledged during its election campaign to tackle the deadly problem.

It insisted it would not support housing amnesties, or condono edilizio, which are seen by many as simply encouraging illegal building.

The centre-left and right parties that have governed Sicily for the past 20 years have suddenly “discovered there is illegal housing there,” quipped M5S head and deputy prime minister Luigi Di Maio, saying “it makes me laugh.”

But Di Maio has himself been accused of pushing for a widely-contested amnesty for illegal housing on the island of Ischia.

As the rains continued to fall across central Italy, Naples mayor Luigi de Magistris slammed the government for failing to budget for “the necessary resources to take preventative action” against future tragedies.

“This past week Naples and many areas of the country have been alarmingly whipped by an unprecedented storm… as if we had lived through a weather earthquake with a tsunami on top,” he said.

Italy's deputy prime minister Matteo Salvini, head of the far-right League, enraged many by blaming what he called “armchair environmentalism” for the widespread devastation, which hit the Veneto region hardest.