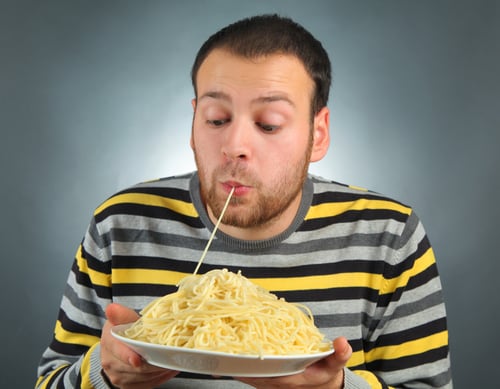 Italian food is loved all over the world, for very obvious reasons. Almost every visitor to Italy wants to try the authentic delights they’ve heard so much about.

But there are a lot of misconceptions about this much-loved cuisine, meaning it can be easy to end up eating something that’s far from authentic – even in Italy-

Here are a few of the most common myths.

Myth no.1: Spaghetti Bolognese is Italian

Lots of people are disappointed to learn that this famous dish doesn’t actually exist in Italy. The same goes for Fettucine Alfredo, marinara sauce, and – sorry – even garlic bread.

Personally I think American-Italian food is delicious, but you’re not going to find much of it over here. At least, not outside of the tourist-oriented restaurants with no Italian clientele in sight.

At most restaurants in Italy portion sizes are often smaller than visiors expect, and pasta dishes and pizzas don’t come piled high with cheese or meat. Dishes are often quite simple and light, since Italian cooks like to let a few high-quality ingredients speak for themselves.

So don’t be surprised if you arrive in Italy and they don’t have the things you expected to find on the menu. Just try what they do have, because you’ll probably end up liking it even more. Wanting to do the local thing, some people will order the lot. And then come to regret it as the food coma sets in before the secondo has even arrived. The worst part? Taking food (except for pizza) home is not really a thing here, so anything uneaten just gets wasted.

READ ALSO: The words and phrases you need to know to decipher Italy’s restaurant menus

I’m not saying Italians don’t eat all those courses. They eat all that and more – on Sundays and special occasions. Or at my mother-in-law’s house.

But the rest of the time, most people stick to two or three courses. In our case, that’s normally some antipasti, a first or second course and maybe a dessert.

Myth no.3: Italian food is unhealthy

Being a complete glutton, I moved to Italy with the grim certainty that I was going to pile on weight. No amount of exercise could help me in the land of pizza, pasta and gelato, I thought.

But of course, there’s so much more to Italian food than that.

My preconceived idea wasn’t completely incorrect. We usually eat pizza at least once a week, and pasta in some form finds its way onto the menu most days. I also follow my italian family members’ lead, pouring olive oil on everything and then topping it with a heap of grated cheese (they even do this with soup, to my initial disgust. Of course, I now throw cheese into my soup as well without a second thought).

Overall, there aren’t many people following fat-free, carb-free diets around here. So what happened to that healthy Mediterranean diet?

The thing is that, as well as all that pizza and tiramisu, I now also eat piles of vegetables fresh from the market, fruit from the trees in the garden, and lentils and chickpeas by the truckload. I can’t say I was doing that regularly before moving here.

Dishes are frequently vegetarian or even vegan by default, as vegetables are often the star of the show in Italian cuisine – particularly in our region, Puglia, where many families have their own orto or vegetable garden and traditional “slow” preparation and cooking methods are still the norm. So, unsurprisingly, I’ve swapped huge cups of frothy, sugary coffee for black espresso. Butter for extra-virgin olive oil. Meat for fish or vegetables. You get the picture. It looks like all that stuff we’ve read about the Mediterranean diet is true.

If you eat like the Italians do, you’ll soon find out the idea that Italian food is unhealthy is a big, fat myth.

This is a specific one but it never fails to surprise me on visits to the UK. For example, at an Italian restaurant in London recently the waiter, from Milan, started pouring olive oil and balsamic vinegar into a small dish at our table, before awkwardly pausing.

“Um… do you want me to do this?” he glanced nervously from me to my husband, who is Italian and with whom he’d just been swapping life stories.

He wasn’t wrong about us Brits and our inexplicable love of pouring oil and vinegar onto a tiny plate, then dipping chunks of bread into it, thinking we’re being terribly continental. We do it in every Italian or Spanish restaurant we’ve got.

But wherever this idea came from, it wasn’t Italy. Italians just dive into the antipasti platter, with plain bread. Perhaps some new olive oil if you’ve just pressed it – but it has to be as fresh as can be.

My husband’s verdict is that this dipping your bread in oil thing is “fine, if you’re starving and there’s nothing else” – just as long as you don’t do it with focaccia, since that’s about 90% olive oil already. (However, this has not yet stopped me from doing it. Sorry, not sorry.)

Myth no.5: You have to eat ‘the Italian way’

Friends who come to visit often ask me nervously if they’re doing things correctly: ‘is it ok if I eat this with my hands?” or “do Italians use a fork and spoon for spaghetti?” I was once worried about this stuff, too.

You can’t blame us foreigners for being anxious about accidentally committing some horrific food faux-pas and being booted out of the restaurant – after all, Italians aren’t known for being finicky about food for nothing.

But here’s the thing: they’re mainly finicky about cooking the food, but how you eat it is usually your own business.

Unless you’re in the fanciest of restaurants – like the Michelin-starred places where they tell you which order to eat the canapes in – no one really cares. Especially not my husband’s family, who pile the table so high with food that you can barely see each other anyway.

You’ll soon discover that only way you could really offend anyone around here is by turning food down or not eating enough. Now, that will require an explanation.

Myth no.6: There’s no international food in Italy

It’s common to hear Italy’s foreign residents, used to having a colourful variety of takeaway menus to choose from back home, complain about the lack of different cuisines available in Italy. And Italians have a not-totally-undeserved reputation for being unadventurous eaters (As one Italian friend put it, ‘why eat that, when we could have pizza?’)

But that’s not to say Indian, Thai, Chinese or Japanese food can’t be found. In fact my town (like many in Italy) has a disproportionately huge number of sushi restaurants, and hosts an international food market every year.

There’s good Thai food in Rome, and great Indian restaurants in Florence. I am however still searching for pho, and I’d sell a kidney for good tacos. But my point is, it’s not quite as bad as some people make out.

Myth no.7: Italians drink a lot of wine

A lot of people imagine Italy as this wine-drenched paradise. And it is – if you’re on holiday. This one obviously comes down to your own perspective, but as a 30-something British woman I often feel like most Italians barely drink at all.

I’m not saying Italians don’t love wine. But most people here enjoy it in tiny, sophisticated amounts, with meals. A lot of women my own age where I live don’t drink at all, and “going out for a drink” is barely a thing, unless it’s at the prescribed aperitivo hour. This is one major cultural difference that took some getting used to.

And you definitely don’t see many drunk Italians. Staggering around is hardly la bella figura, after all. So if you’re used to wild nights out in your home country, let’s just say things are about to get a lot more civilised.

Habits do vary greatly by region, and, like I say, your perspective. But if you’d usually go to a bar after dinner, don’t be surprised if your Italian date would rather get gelato.