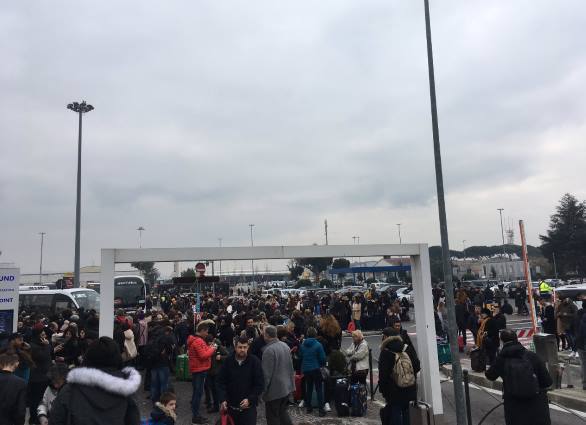 Aeroporti di Roma said parts of the airport are now reopening, but the departures area of the terminal building remains closed for now because of the presence of smoke..

“The main fire was put out by firefighters in under a minute,” it wrote on Twitter.

Firefighters at the scene told The Local that the fire started in a storage area under a Duty Free shop.

Large crowds are waiting outside the terminal bulding as buses continue to arrive.

The Local Italy Editor Jessica Phelan, at the airport this morning, said anyone travelling from the airport today can expect crowds and delays.

Fire at Rome Ciampino airport this morning, departures has been closed for the past hour and a half. This queue is for the only available toilet (in arrivals) ☹️@TheLocalItaly pic.twitter.com/1uwPcSoS4p

Meanwhile paramedics are treating one person who’s been taken ill in the arrivals area, where a few hundred people are waiting.

Some flights have apparently been diverted to Fiumicino airport on the other side of Rome.

Ciampino airport is mainly served by Ryanair and other low-cost airlines. For updates, passengers are advised to check with their airline, Aeroporti di Roma said.