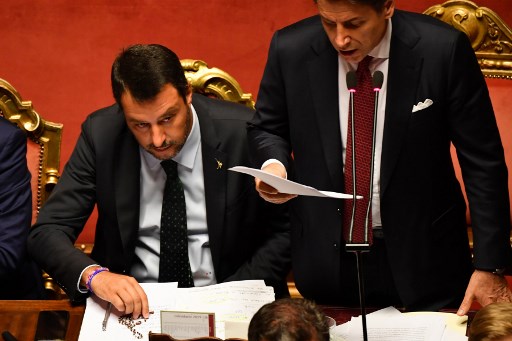 Prime Minister Giuseppe Conte launched a scathing attack on League leader and Deputy Prime Minister Matteo Salvini in a highly-anticipated speech on Tuesday afternoon, before saying he would offer his resignation to President Sergio Mattarella.

Conte told the Senate that Salvini was “irresponsible” to spark a political crisis and attept to bring down the government in the hope of forcing snap elections.

In the first half of his speech Conte launched a full-scale attack on Salvini, denouncing him for plunging Italy into crisis out of “personal and party interest.”

Conte's address came following a week of fallout from Salvini's decision to back out of the alliance on August 8, plunging the economy into turmoil.

Afer Conte announced his intention to resign, Salvini hit back saying: “Thank you, finally, I would do it all again.”

Salvini “violated the solemn promise he took when the government began that if there were differences they should be discussed in good faith and with loyal collaboration,” Conte said as League Senators booed and hissed, and Salvini, sitting beside Conte, shook his head and made faces.

Conte has been a mostly quiet figure during the past 14 months of the ruling League-Five Star Movement coalition government, of which he was appointed as a “neutral” head.

“I heard you calling for 'full powers' and invoke (demonstrations in) the piazzas to support you, which worries me,” Conte said.

Italian dictator Benito Mussolini in 1922 assumed so-called full powers to govern the country at his whim.

“We don't need full powers but leaders who have a sense of institutions,” Conte said.

“Our system precludes authoritarian ways,” Conte continued, as Salvini looked on beside him.

“Making citizens vote is the essence of democracy, asking them to vote every year is irresponsible,” Conte added.

“I'm ending this government experience here… I will go to the president of the republic to inform him of my resignation,” he said.

Salvini responded with a 20-minute speech in which he spoke about migration – a topic Conte had previously said the interior minister was “obsessed” with.

During Salvini's speech, dozens of senators walked out of the room while one was reprimanded by the Senate's president for holding up a protest sign.

A small group of protesters heckled League senators as they arrived at the Senate.

“Get out, buffoons, get out, mafia,” the protesters shouted, prompting a League senator to wave his middle finger at them

Conte is expected to offer his formal resignation this evening after the end of today's debate in the Senate, which began at 3pm and is expected to last almost four hours.