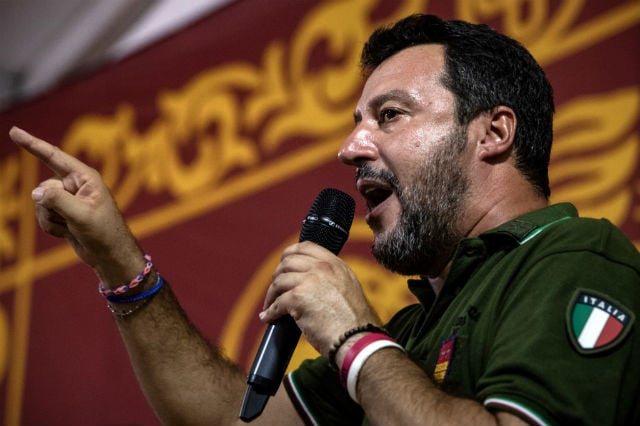 Italy's outgoing interior minister Matteo Salvini rallies supporters on Friday. Photo:Marco Bertorelli/AFP
Salvini and his anti-migrant League party have been riding high in opinion polls but are being kicked out of the ruling coalition with the anti-establishment Five Star Movement (M5S) for trying to bring down the government.
“I say to the friends of Forza Italia who say 'we must ally with the League'… we do not need anything or anyone,” Salvini told a rally in Conselve, outside Padua, in his northern Italian political heartland.
Salvini earlier this month pulled the plug on the M5S-League coalition as opinion polls predicted that he and right-wing allies Forza Italia and the extreme-right Brothers of Italy would garner enough votes to form a majority
government.
Polls at the time predicted 36 percent for the League, seven for Forza Italia and seven for Brothers of Italy.
READ ALSO:
The League leader sought immediate elections but was out-manoeuvred by a surprise alliance between the M5S and the centre-left Democratic Party (PD) which defeated his no confidence motion.
“If we got out of one thing because we couldn't do anything then we won't get into something else to continue doing nothing,” Salvini said in Padua.
Outgoing Prime Minister Giuseppe Conte has been tasked with forming a new M5S-PD government without the League.
Salvini told Friday's rally that the ongoing coalition talks were “a squalid spectacle” and called on President Sergio Mattarella to call an election.