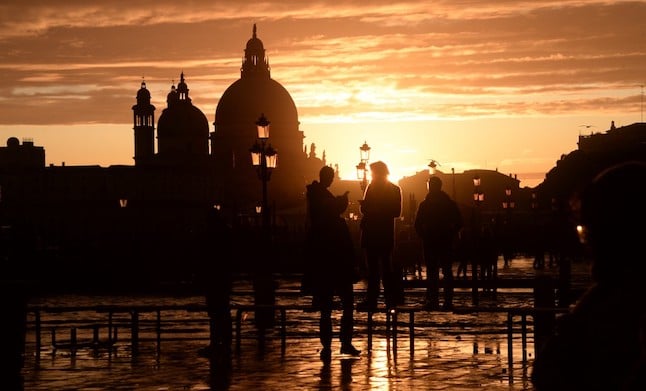 Sunset in Venice on Sunday, when the worst of the flooding was thought to be over. Photo: Filippo Monteforte/AFP

The wave of bad weather that struck throughout Italy – from rivers of water rushing through the streets of the southern town of Matera to tornados in the Grosseto region of Tuscany – was still a concern in certain areas, and was expected to continue.

“The water has stopped rising,” tweeted mayor of Venice Luigi Brugnaro, who has estimated damage so far from the invading salt water at over €1 billion.

“Venice is working to restart,” Brugnaro said on Sunday, after the waters submerged yet again an estimated 70 percent of the city. “Thanks to all who worked so hard to get through the day.”

Schools reopened on Monday as shopkeepers with mops and buckets in hand tried to muck out the water and mud that had flooded their stores since Tuesday.

The expected high tide of 110-115 cm was a welcome improvement on the past week when the so-called “acqua alta”, or high waters, exceeded a level of 150 cm three times.

Venetians are accustomed to flooding in their UNESCO city surrounded by a lagoon, but last week's wave of inundations was unprecedented in modern times, with Tuesday's high not seen since 1966.

Outside a gallery, painter Davide De Guglielmi vowed to reopen after cleaning up.

“We're built like that, we're stubborn. We know the price we have to pay to live in this city,” De Guglielmi told AGI. “We've lost almost everything,” he said. “All the Christmas orders had just arrived: new frames, gift cards…” he said. Residents and businesses will shortly be invited to claim compensation for the damage, the mayor said. People whose houses have been hit are eligible for up to €5,000 in immediate government aid, while restaurant and shop owners can receive up to €20,000 and apply for more later.

The crisis has prompted the government to release €20 million in funds to tackle the devastation. Culture Minister Dario Franceschini has warned that the task of repairing the city, where more than 50 churches have suffered damage, will be huge.

A massive infrastructure project called Mose has been under way since 2003 to protect the city, but the multi-billion euro project has been plagued by cost overruns, corruption scandals and delays. Most of the city's cash machines were no longer working, making life even more difficult for tourists and Venetians.

Hotels reported cancelled reservations, some as far ahead as December, following the widespread diffusion of images of Venice underwater.

“We didn't expect there to be so much water, now we're soaked,” said French tourist Magali Mariolou, visiting Venice for her wedding anniversary.

“We'll come back another year when it's a bit drier. The boots are heavy, they're full of water!” Older residents who remember the infamous “acqua alta” of 1966, when the water rose to 1.94 metres, say they have not seen such frequent flooding before.

Many, including Venice's mayor, have blamed the disaster on global warming and warned that the country, which is prone to natural disasters, must wake up to the risks posed by ever more volatile seasons.