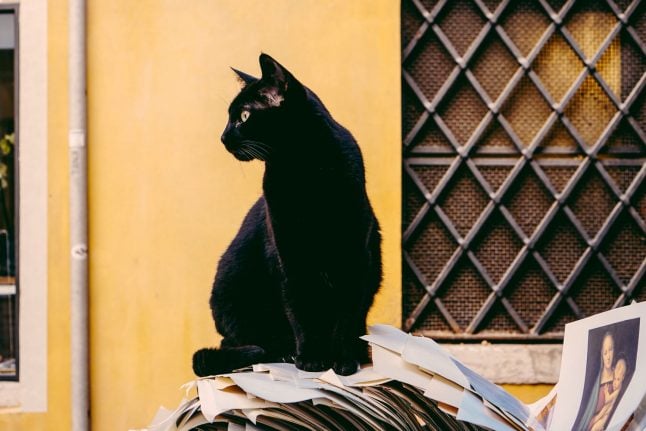 So if you want to ensure good fortune comes your way, here are some of the things to watch out for, according to customs in many parts of Italy.

First, the good news. Friday the 13th isn’t a bad omen as it is in Western countries — but Italy has its own date that you should be wary of: Friday the 17th.

Just as some Western airlines avoid including the 13th row on planes, you might find number 17 omitted in Italian planes, street numbering, hotel floors and so on, so even if you’re not the superstitious type, it’s handy to be aware of.

The reason for this is because in Roman numerals, the number 17 (XVII) is an anagram of the Latin word VIXI, meaning “I have lived” — the use of the past tense suggests death, and therefore bad luck. It’s less clear what’s so inauspicious about Friday.

So don’t be surprised if, next time Friday 17th rolls around, you notice some shops and offices closed ‘per scaramanzia’…

Thought there was no point crying over spilled olive oil? Think again. In Italy, this is very bad luck indeed.

And it’s not just because Italians don’t want to see their top quality oil wasted (though the tradition likely has its roots in a time when olive oil was a luxury), or because oil stains are tough to get out of clothes. The act of spilling the liquid is considered to bring ill fortune.

Some Italians will tell you that you should never toast with a glass of water; the thinking behind that is that it brings bad luck because water is less expensive and flavourful than wine.

In fact, the whole tradition of toasting is a minefield. Depending on where you are in the country, you could be told it’s also bad luck to cross arms with anyone as you clink glasses, to avoid eye contact while toasting or to set down your glass before having a first sip. The malocchio is the Italian belief that a look of jealousy can bring harm to those it is aimed at — usually in the form of physical pain, such as a headache.

Having birds or birds’ feathers in your house is also a big no-no because their patterns are supposedly similar to the evil eye.

To ward off the evil eye you should make a gesture similar to horns and point it downwards behind your back. Some Italians take things a step further and wear a lucky amulet shaped like a horn.

If you’re from the UK or US, you might be used to saying ‘touch wood’ or ‘knock on wood’ after saying something that might tempt misfortune. In Italy, look for some iron instead.

‘Toccare ferro’ (touch iron) is an abbreviated form of ‘toccare ferro di cavallo‘ (touch horseshoe) which dates back to when horseshoes were thought to ward off devils, witches and evil spirits. These days, superstitious Italians might still carry a horseshoe charm or a simple piece of iron around with them, just in case. When walking arm in arm with a friend, make sure to pass on the same side of a lamppost rather than splitting to go around it. Italian folklore warns that straying from this rule could spell the end of the friendship.

In some cultures, black cats are thought to bring good luck, but it’s quite the opposite in Italy, where they are considered unlucky due to associations with witchcraft.

In fact, thousands of black felines are killed every year by superstitious Italians, leading animal rights’ organizations to declare November 17th Black Cats Day, in order to raise awareness of the pets’ plight and combat superstition.

Hearing a cat sneeze, on the other hand, brings good luck.

If you receive something sharp such as a penknife as a gift, prick the person who gave it to you, or give them a coin in return. If you fail to do this, you risk ruining the friendship forever.

It is believed that if you put a photo of a loved one on a bed – for example while tidying, packing or doing housework – this will bring them bad luck. Placing a hat on a bed is also unlucky.

These beliefs date back to a time when beds were associated with illness and death, and priests would remove their hats when arriving to visit someone in their sickbed.

The leaning tower of Pisa

Local students avoid the monument — and not just because it’s overrun with tourists. Tradition states that if you go to the top of the famous leaning tower whilst you are at university, then you will never be able to graduate.

Several cities and towns around the country have their own version of this superstition: in Bologna for example, climbing the local tower before graduating is thought to mean you will never do so. Saying the same word at the same time as somebody else is thought to be an omen that you will never get married – but there’s a way to reverse your fortune. Simply touch your nose immediately afterwards, and the bad luck will be undone.

Spotting a hearse with no coffin inside is thought to be an omen that your own death is approaching. To ward off this ill fate, men must touch their groin and women their breast as a gesture of good luck and fertility.

Although in general the number 13 isn’t as spooky as in other countries, at a dinner table it is meant to be very bad luck indeed. ù

The superstition stems from the Last Supper and the fact that Jesus’ traitor, Judas Iscariot, was the 13th and final person to be seated, so if you find yourself at a table of 13, watch your back. A reproduction of Caravaggio’s The Last Supper. Photo: Mario Laporta/AFP