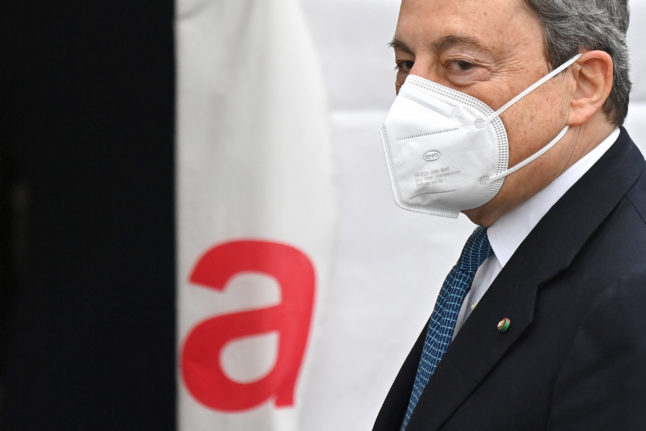 “I have not yet made a booking, but my age group is among those who are allowed to have the vaccine and yes, I will have the AstraZeneca,” the 73-year-old told a news conference, the day after the EU medicines agency gave the jab the green light.

“My son had it the day before yesterday in England,” he added.

Italy’s medicines regulator suspended the use of AstraZeneca/Oxford vaccines on Monday following fears of a link to blood clots – despite the deteriorating health situation which saw most of the country put into partial lockdown this week.

But administration of the jabs resumed on Friday afternoon after the European Medicines Agency (EMA) on Thursday declared the vaccine “safe and effective”.

The health ministry’s prevention chief Gianni Rezza said that after the pause, the number of AstraZeneca vaccinations would now be “doubled” to make up for the delay.

Draghi defended the suspension – which government sources suggested led to 200,000 fewer jabs this week – and said that while it had slowed the vaccination campaign, “this slowdown has not been disastrous”.

He also suggested Italy could bypass the EU’s joint procurement strategy to buy Russia’s Sputnik V vaccine, maybe even if the EMA does not approve it.

Asked what Italy would do if the EU regulator’s approval did not come quickly, he said: “If European coordination doesn’t work, especially in a matter like health, you have to be ready to go it alone.

“This is what (German Chancellor Angela) Merkel said and this is what I say here.”

Merkel said Friday that Germany will order the Sputnik vaccine if it is authorised for use in the European Union, adding that Berlin could secure supplies on its own if the bloc would not.

While she would prefer that orders were placed in bulk by the bloc, “if such an European order did not come about… then we must go the German way”.

More than 104,000 people with coronavirus have already died in Italy since the pandemic swept across the country just over a year ago, according to official figures.

A fresh surge in infections caused the government to shut schools, restaurants and shops in most of Italy on Monday, for at least three weeks.

Draghi, a former president of the European Central Bank who took over at the head of a national unity government last month, says the only way out of the crisis is through the vaccination programme.