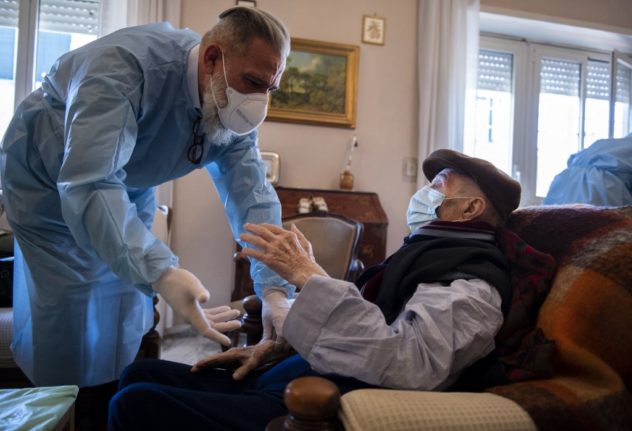 A nurse talks with Giovanni, 99, while administering a Covid-19 coronavirus vaccine as part of an at-home vaccination campaign in Rome. Photo: Tiziana Fabi/AFP

“Yesterday in Italy over 500,000 vaccine doses were administered,” Speranza said in social media posts on Friday.

“I thank the women and men of the national health service and all the institutions for a great team effort.”

The head of Italy’s Department for Civil Protection, Fabrizio Curcio, said last week he did not expect the country to reach the goal of half a million daily shots until early May amid a string of setbacks.

He stressed that, no matter when this figure was reached, “what will matter will be keeping to it over time”.

The target had originally been set for mid-April and was pushed back after Italy’s vaccine rollout was hit repeatedly by supply delays, bureaucratic problems, and cancelled appointments amid a loss of public trust in the AstraZenenca jab.

The jump in vaccination numbers on Thursday followed days of cancelled appointments and vaccine centre closures earlier this week as many regions started to run out of doses.

Despite the new increase, Italy’s seven-day average of daily inoculations is still only around 360,000, the Il Sole 24 Ore newspaper calculated

New vaccine supplies started to arrive in Italy from Wednesday, and the country’s vaccination rollout will now speed up “significantly” from May, the Italian government’s Covid commissioner Francesco Figliuolo said this week

Figliuolo said on Thursday that he “hoped” Italy would reach the target of having 80% of the adult population vaccinated “by the end of September”.

Italy has given a total of 19.4 million shots as of Friday afternoon, and has 5.7 million people fully vaccinated, official figures show.

Other European countries are also now picking up pace in their vaccination rollouts, with Germany setting a new European record of one million doses on Thursday.

According to the European Centre for Disease Prevention and Control (ECDC), Italy’s vaccination efforts are overall slightly behind those of other large European countries.

Just under 25 percent of the Italian population has so far received at least one dose of the vaccine, compared to 28.1 percent in Germany, 26.7 percent in France and 27.6 percent in Spain.