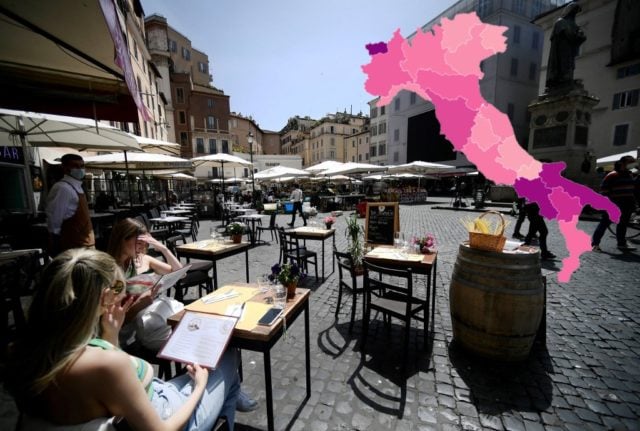 As the Italian government announced its plan for gradual reopening at the end of April, health experts and doctors’ unions warned that it would not be safe to reopen until certain criteria were met.

These included having a seven-day average incidence rate of 50 cases per 100,000 – a rate which experts say is low enough to allow effective testing and tracing.

“Although the vaccination campaign is progressing faster and faster, overall, the incidence remains high and is still far from the level (50 per 100,000) that would allow the containment of new cases,” stated the report.

This figure is a national average, and the situation varies considerably around the country – as do the current restrictions in place, which can change depending on the weekly health data in each Italian region.

However most regions are now designated lower-risk ‘yellow’ zones, where many restrictions on business openings and movement have been relaxed.

It won’t be known what impact these initial reopenings have had on the infection rate until data becomes available in mid-May, when further relaxations to the rules are planned.

It’s expected that the number of new infections will start to drop faster as Italy’s vaccination campaign progresses.

However, Italian authorities don’t expect to have the majority of people in the country vaccinated until autumn, and say that continued health measures are the only way to get numbers down in the meantime.

Even those who have received the first dose of the vaccine must “continue to be cautious”, said ISS president Silvio Brusaferro at a press conference on Friday.

“First of all because it takes two to three weeks before a first immune response forms, which is complete after the second dose. Masks and distancing will still be needed until a large part of the population is vaccinated, because even those who are immunized cannot exclude the risk of infecting those who are not.”

Around 25 percent of Italy’s population has had one dose of the vaccine so far, while just over ten percent is fully vaccinated, official figures show.