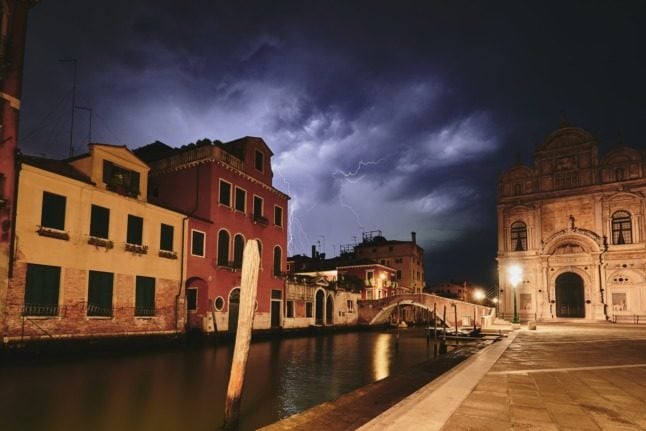 Heat and hail: a 'weekend of fire' is predicted across Italy. Photo by Alessio Furlan on Unsplash

The second-highest level of alert for extreme heat has been confirmed for 10 cities on Sunday and one will be in the highest-category red alert, announced Italian authorities.

Six cities are on orange alert for Saturday, including Bologna, Bolzano, Florence, Perugia and Turin.

On Sunday, this figure rises to 10 as they are joined by Ancona, Campobasso, Palermo, Rieti, Rome and Verona.

Brescia is on orange alert today and tomorrow and moves into the red category on Sunday.

An orange alert means that there are high temperatures and weather conditions, which “may have adverse effects on the health of the population, particularly in susceptible population subgroups,” states the Ministry of Health.

Moving up the scale, a red alert is classified as a heatwave. These are “high-risk conditions that persist for three or more consecutive days,” added the Ministry.

Italian authorities have called on people to be vigilant and look out for the elderly and vulnerable to prevent heat stroke.

The “weekend of fire”, as it’s being dubbed by forecasters, is coming with peaks of over 40C across most of the country and potentially “violent” thunderstorms predicted for the north, according to ilmeteo.it.

“Temperatures are expected to rise sharply due to the arrival of very warm currents directly from the Sahara Desert,” Il Meteo writes.

On Saturday, highs of around 40C are expected, especially on the low plains of the north including Modena, Bologna and Ferrara and in the inland areas of Tuscany and in Sardinia and Sicily.

And the heat covers many other parts of Italy too, with many cities expecting to reach 34-35C.

Adding to the hot and sticky atmosphere will be the high humidity levels, the so-called ‘Afa‘, or hot-humid air, that will particularly affect the Po Valley and the Tyrrhenian regions.

The air is set to become increasingly heavy in these areas, creating an extra layer of discomfort.

On Sunday, “Italy will find itself in the middle of the battlefield”, according to weather forecasters, as the heat from Africa will meet a cold front coming from the Atlantic.

Initially, there’ll be lots of sunshine and warm weather with peak temperatures of 39-40C in most regions.

But the afternoon and evening is expected to see thunderstorms, even bringing hail along with it, “starting from the Northwest and the Alps in general”, reads the forecast.

For the rest of the country, cloudy or partly cloudy skies are expected.

Hot weather and storms are also predicted elsewhere in Europe, with many areas in France placed on alert as storms are forecast across the country.