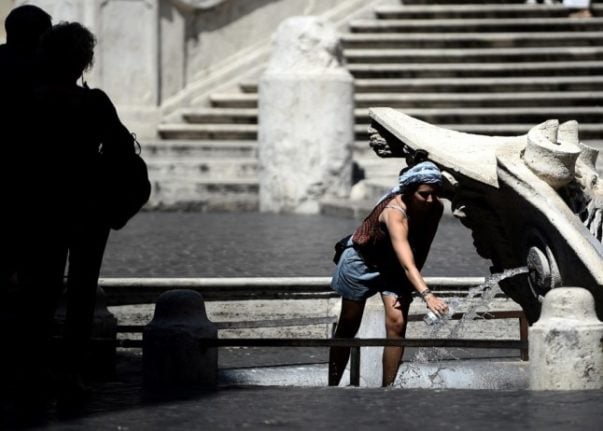 Cooling off by the Spanish Steps in Rome. Photo: Filippo Monteforte/AFP

While temperatures are still in the low to mid-30s across Italy, the country has been enjoying a brief respite from the more intense heat and humidity felt at the end of June.

But things are set to get hot sticky again this week, with new currents of warm air moving in from North Africa, forecasters say.

The cities of Rome and Florence can expect to swelter in up to 40C on Thursday, according to Italy’s national weather service, and temperatures could reach 37C in Emilia Romagna (Bologna, Ferrara, Forlì), Lombardy (Mantua), and Veneto (Rovigo, Verona), and up to 39C in Marche.

But the south will again see the highest temperatures, with up to 42C expected in the regions of Puglia and Basilicata (particularly the cities of Foggia, Taranto, and Matera) and on the islands of Sicily and Sardinia, especially in inland areas.

The ‘caldo Africano‘ is characterized, especially in southern regions, by still air and white, dusty skies along with soaring temperatures.

Adding to the sultry atmosphere is the so-called ‘Afa‘, or hot-humid air.

Thunderstorms are also expected in some northern areas, particularly around the Alps, on Wednesday and into Thursday.

Forecasters also predict localised outbreaks of heavy rain and hail at the end of the week.