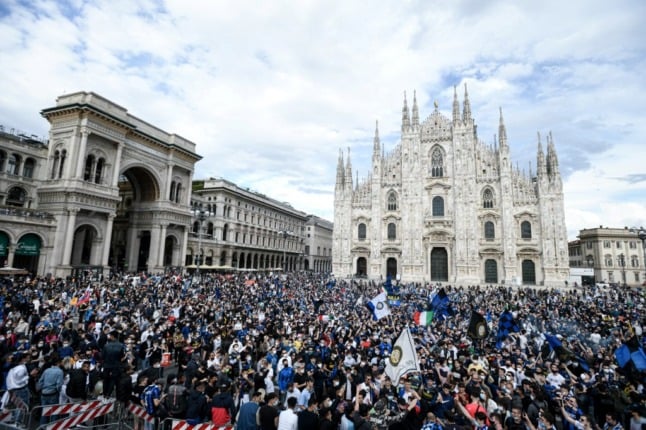 Sporting events draw crowds - and risk new surges in the spread of the coronavirus. (Photo by Piero CRUCIATTI / AFP)

The euphoria of Italy fans seeing their national football team claim the Euro 2020 title could soon be dampened as the effect of social gatherings makes itself felt, Pierpaolo Sileri told Radio 24 in an interview.

“It’s great to see people in the squares, but we will inevitably see the number of infections rise. The Delta variant will spread and become dominant sooner than expected,” said Sileri.

“I fear by the end of the month [there will be] three to four times the contagions that we have today,” he warned.

He echoed recent warnings from the WHO, saying the trend would be partially accelerated by people gathering in large numbers to watch football and tennis matches.

With a potential resurgence in cases, some lockdown measures could be reintroduced.

“There is no need to reinstate the obligation to wear a mask outdoors, but controls should be strengthened in case of gatherings,” said Sileri.

“We need constant vigilance, we need to strengthen controls in nightlife areas, because where you don’t keep your distance you have to wear a mask, otherwise sanctions must be applied.”

EXPLAINED: When do you still need to wear a mask in Italy?

He went on to say that Italy’s health situation could evolve in the same way that the UK’s did, claiming that the number of infections “will continue to grow” through the summer.

Italy is currently experiencing a rise in coronavirus cases due to the Delta variant after 15 weeks of falling figures, according to the latest weekly monitoring report by the Higher Health Institute (ISS), which reports that the Delta and Kappa strains together account for nearly 28 percent of new infections in Italy compared to 5 percent in May.

The health authorities say that new cases are mainly among those who are unvaccinated or have only had their first dose.

Over 44 percent of the population over 12 years old has been vaccinated, the latest government figures show, but “there will be a gradual increase in the number of people who have been vaccinated with a double dose, and by September we will be around 70 to 75 percent immunised,” according to Sileri.

READ ALSO: How many people in Italy still aren’t vaccinated?

Yet vaccinations alone aren’t enough, according to Andrea Crisanti, director of the department of microbiology at the University of Padua.

The Delta variant is “one step away from becoming vaccine-resistant, so the less it is transmitted the better,” he told Rai news. “I think we should combine the vaccination campaign and at the same time strengthen our tracking capacity,” he added.

Not only are vaccinations and tracing those who test positive for Covid-19 hoped to help stem the rise in new infections, but “some backward steps” also can’t be ruled out, Sileri said.

He hinted at a possible reinstatement of the country’s colour system in some regions. The various tiers of zones classify the level of health risk and set corresponding restrictions. Supporters of the Italian national football team celebrate their teams’ first goal in the UEFA EURO 2020 final football match between England and Italy, at the Piazza del Popolo fanzone, in Rome on July 11, 2021. (Photo by Filippo MONTEFORTE / AFP)

Italy’s 20 regions are all currently placed in the lowest-risk ‘white zones‘, where most restrictions have now been dropped. But Sileri said that they could be reintroduced and that authorities may even bring back the highest-risk red zones, which could be activated at a local level.

READ ALSO: Everything that changes in Italy in July 2021

“At the moment the number of infections is small and there is no need for some regions to return to the [low-medium risk] yellow zone. It is clear, however, that if we were to have an explosion of cases, admissions and hospital pressure, we would have to take a step back. Today there is no such risk,” he said.

But Maria van Kerkhove, an infectious disease epidemiologist and Covid-19 technical lead at the WHO, sounded a more urgent alarm.

Am I supposed to be enjoying watching transmission happening in front of my eyes?

The #COVID19 pandemic is not taking a break tonight… #SARSCoV2 #DeltaVariant will take advantage of unvaccinated people, in crowded settings, unmasked, screaming/shouting/singing. Devastating.

Italy’s health minister Roberto Speranza also voiced his worries about the consequences of people going on holiday and gathering to watch sporting events.

He said: “The European football championship and the Wimbledon tournament are over, and the Azzurri are the main players. It is a great joy after terrible months. Even in these moments of national pride we never forget that our ‘game’ to defeat Covid is not yet won,” reported news agency Ansa.

“Let’s support our champions responsibly, remembering the rules of spacing and using masks correctly,” he added.