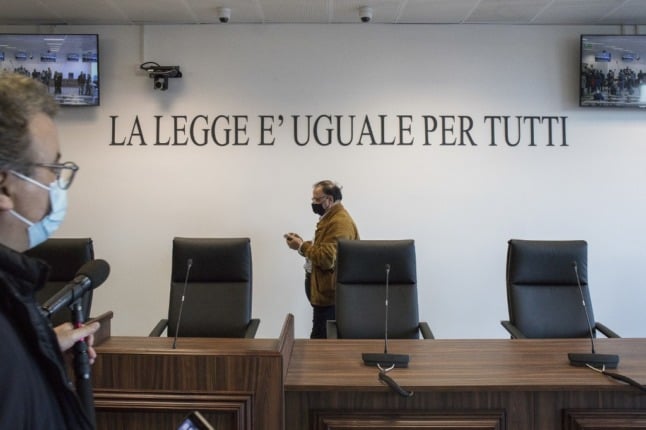 An inscription at a courthouse in Calabria reads "The law is equal for all". Photo: Gianluca CHININEA / AFP

The Italian parliament on Thursday approved reform of the criminal justice system, and has also given the initial green light for changes to the civil side.

Reforming Italy’s creaking justice system is one of the toughest tasks facing Prime Minister Mario Draghi’s government – and one of the conditions the EU attached to the granting of the post-virus recovery fund.

The percentage of cases resolved has been falling for the past decade and timeframes have stretched to the longest in the EU after Greece, according to the European Commission for the Efficiency of Justice (CEPEJ).

A case takes in theory 527 days to be resolved in Italy, compared to 420 in France and just 94 in Luxembourg, according to a 2020 report.

Delays are not simply a headache for those involved, but have an impact on business activity.

Brussels has insisted on reform “because the efficiency of justice goes hand in hand with the promotion of investments, particularly by foreign companies”, Maurizio Bellacosa, professor of criminal law at Rome’s Luiss university, told AFP.

Some 2.3 billion euros of the EU funds has been earmarked to speed up legal procedures, by 40 percent in civil cases and 25 percent in criminal matters.

At the heart of the criminal reform is a plan to reduce the limitation periods for less serious cases, where currently no deadline exists after the initial judgment.

Initial appeals must now be resolved within two years, with final appeals lasting a year, after which the legal action ends.

The most serious cases such as terrorism, mafia activity, drug trafficking and sexual violence will be allowed five and 2.5 years respectively, with no limits on crimes involving life sentences.

The reform will not fully come into effect until 2025, to allow time to clear some of the backlog which has been made worse by coronavirus pandemic,which paralysed the courts for months.

One crucial element in its success will be the recruitment of more magistrates and assessors, notably in the appeal courts.

“The reform must be accompanied by large investments to make the judicial machine more efficient, in terms of structures, an increase in magistrates and personnel,” Bellacosa added. “That’s the real challenge.”

However, not everyone is wholly behind the reform plan.

Leading anti-mafia prosecutor Nicola Gratteri is one of those who has warned it could have disastrous effects.

“Fifty percent of trials will be declared inadmissible in appeal or in cassation (final appeal),” he warned earlier this month.

“Europe said ‘make trials faster’, not to stop having trials.”

But Draghi is under pressure to push through the reforms to show Brussels he is serious about making the changes necessary to secure the EU funds, which Italy is hoping will help it climb out of a deep recession sparked by the pandemic.

The deal with Brussels states that the European Commission will not authorise further payments until Italy meets the milestones and targets set out in its plan.