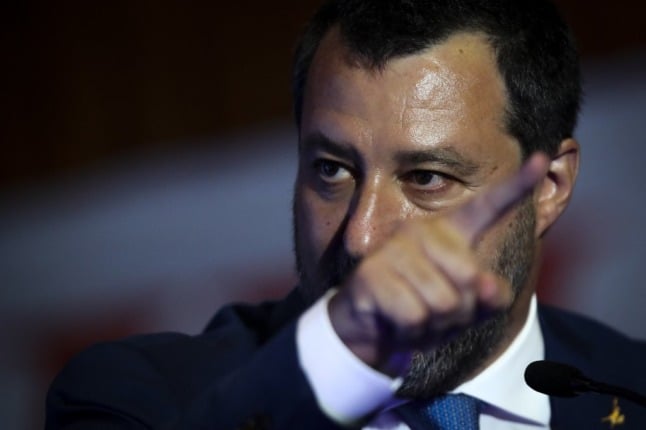 Salvini attended the opening hearing in Sicily’s Palermo, which came a month after it was first postponed.

The hearing was expected to be largely procedural, with Judge Roberto Murgia expected to decide on the admissibility of witness lists sought by both sides.

Salvini, the leader of the far-right League party who is known for an “Italians first” policy, is charged with kidnapping and abuse of office for using his position as interior minister to detain the 147 migrants at sea in August 2019.

On the opening day of trial in Palermo, prosecutors asked that they be allowed to question Salvini, who was present in court, on the stand.

The hearing, which came a month after the trial was first postponed, was largely procedural and lasted less than three hours before Judge Roberto Murgia set the next hearing for December 17th.

If convicted, Salvini could face a maximum of 15 years in prison.

The 48-year-old has said that the decision was not his alone, but agreed by the government, including by the then-prime minister, Giuseppe Conte.

Judge Murgia said US actor Richard Gere would be allowed to take the stand as a witness, as requested by civil party Open Arms, the Spanish charity that operated the rescue vessel.

The actor had boarded the ship in solidarity with the migrants before it docked at the Sicilian island of Lampedusa.

Prosecutor Francesco Lo Voi had earlier told the court the actor’s presence was not required as it would create “spectacle” and there were more qualified witnesses.

Salvini tweeted a photo of himself inside the courtroom, standing in front one of the cells used for some defendants.

“This is the courtroom of the Palermo prison. The trial wanted by the left and by the fans of illegal immigration begins: how much will it cost the Italian citizens?” he tweeted.

Outside the courtroom, the founder and director of the Spanish charity Open Arms that operated the rescue ship said the trial was not politically motivated.

“Saving people isn’t a crime, but an obligation not only by captains but by the entire state,” Oscar Camps told journalists.

The beginning of the trial came as 406 migrants rescued in various operations off the coast of Libya by the German charity ship Sea Watch 3 arrived at the Sicilian port of Pozzallo to be disembarked.

In the 2019 Open Arms case, migrants were finally allowed to leave the vessel after six days, following an order by the prosecutor’s office. A subsequent onboard inspection revealed serious overcrowding and dire sanitary conditions.

Salvini has staunchly defended himself, saying he was protecting the country with his “closed ports” policy, which aimed to stop people attempting the dangerous Mediterranean crossing to Italy.

Italy’s Senate voted last year to strip Salvini of his parliamentary immunity, paving the way for the trial.

A related case in which Salvini, 48, was accused of blocking other migrants at sea on an Italian coastguard boat was thrown out by a court in Catania earlier this year.

According to prosecutor Andrea Bonomo, Salvini “did not breach any international convention” in his treatment of the migrants, and acted with the support of his government, ANSA news agency reported.

On Friday evening before Saturday’s court hearing in Palermo, Salvini tweeted that migrant arrivals continue in Italy, adding, “we need to block the landings”.

Salvini’s League takes a hard line on migrants, arguing that Italy bears an unfair burden as the first point of entry into Europe for those arriving from northern Africa.

When he blocked the ships, Salvini was part of a coalition government and held the positions of interior minister and deputy prime minister.

Italy will not recognise the results of “illegal” annexation referendums organised by Moscow in the Russian-occupied regions of Ukraine, Prime Minister Mario Draghi said on Thursday.

The Italian leader’s press office said that Draghi had spoken to Ukrainian President Volodymyr Zelensky to reassure him of Rome’s “continued support” for Kyiv.

Draghi and Zelensky reportedly discussed the “illegal referendums” currently being held in the regions of Donetsk, Lugansk, Kherson and Zaporizhzhia – referendums which, in the words of the Italian PM, “Italy will not recognise”.

On Tuesday, Kremlin-installed authorities in the four above-mentioned Ukrainian regions claimed victory in the votes, saying that preliminary results showed a majority in favour of annexation by Moscow.

The following day, the leaders of Ukraine’s Lugansk, Kherson and Zaporizhzhia regions called on President Vladimir Putin to formally annex the territories to Russia.

Only Donetsk – whose Donbas region has been partially controlled by pro-Kremlin separatists since 2014 – had yet to formally ask Putin for annexation.

Italy has supported Ukraine since Russia invaded its territory in February, but Europe is currently watching closely to see whether the country will continue to do so after Sunday’s general elections were won by the Eurosceptic Brothers of Italy party.

Giorgia Meloni, the leader of the far-right coalition that triumphed at the polls, tweeted her “loyal support” for Ukraine on Tuesday.