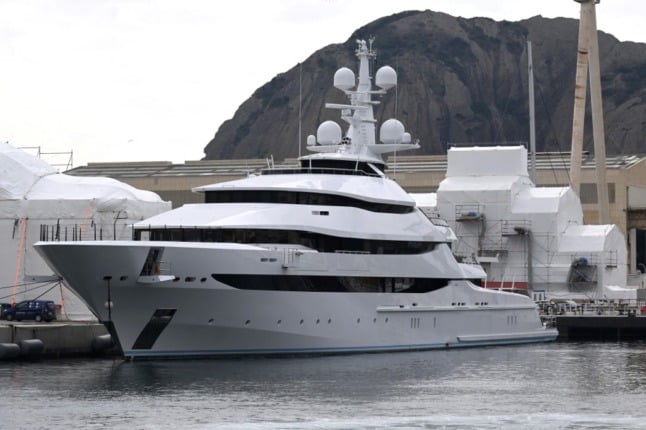 A picture taken on March 3, 2022 in a shipyard of La Ciotat, near Marseille, southern France, shows a yacht, Amore Vero, owned by a company linked to Igor Sechin, chief executive of Russian energy giant Rosneft. (Photo by NICOLAS TUCAT / AFP)

Steel magnate Mordashov owns Severstal group and is among the ultra-wealthy, influential Russians blacklisted by Brussels for their perceived closeness to the Kremlin.

Since Russia’s invasion of Ukraine began on February 24, the EU has moved to freeze the assets of connected oligarchs and bar them from entering the bloc.

Mordashov used a statement issued Monday to distance himself from Putin’s war in Ukraine.

“I have absolutely nothing to do with the current geopolitical tensions and I don’t understand why the EU has imposed sanctions on me,” he said.

Italian media have reported that another yacht, the Lena owned by Gennady Timchenko, the billionaire co-founder of commodities trader Gunvor, has been seized in Sanremo.

The first yacht seized as a result of EU sanctions was the Amore Vero, snatched Thursday in the French port of La Ciotat.

The mega-yacht belongs to a company linked to the head of Russian oil giant Rosneft.

Yachts, symbols of the massive wealth accrued by Russia’s elite, are among their overseas assets being targeted by Western sanctions.

The EU sanctions target more than 500 Russian individuals or entities whose assets are to be traced and frozen.