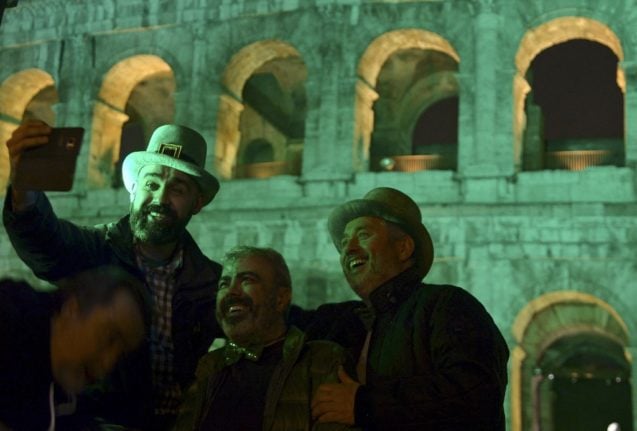 People celebrate in front of Rome's Colosseum, illuminated in green for St. Patrick's Day in 2019. Photo by FILIPPO MONTEFORTE / AFP

Thursday, March 17th is known as St Patrick’s Day around the world. The celebration of Irish culture is not marked in Italy in the same way as in some other countries, but there are still events laid on around the country.

While Italy usually lights up its landmarks in green for the occasion, this year the ‘Global Greening’ for St Patrick’s will be skipped so countries can continue to light up monuments in support of Ukraine.

READ ALSO: Nine things to do in Italy in spring 2022

But many of the country’s bars, restaurants, musicians and artists say they’re looking forward to kicking off a weekend of events in honour of St Patrick’s for the first time in two years, after the Covid-19 pandemic put a stop to celebrations.

Here’s are some of the special events planned in Italy’s major cities on Thursday and into the weekend.

The northern city is Italy’s main destination for international residents and there’s no shortage of St Patrick’s events over this week.

The four-day ‘St. Patrick Irish Fest’ event returns to the city’s Ortica area this year, kicking off on Thursday at 6pm.

Promising Irish stew and other traditional dishes along with plenty of Guinness, the festival offers a programme of live music including tributes to US and the Cranberries, Find more information here.

The ‘Colors of Ireland’ open-air photography exhibition on Milan’s central Via Dante aims to “show Milan the wonder of Irish natural landscapes”, while Cinema Anteo is hosting an Irish film festival until Friday, with Irish films shown in the original language with Italian subtitles

From March 14-20th, there’s a free pint of beer on offer at many of Milan’s Irish and international pubs, including Pogue Mahone’s, Mulligans, The Friends Pub, Bones Public House, The Football Pub, Mag La Pusterla, Rock’n’Roll, and Cheers Pub.

“After two years of hell, we are just super happy to be finally getting back on tour for St. Patrick’s Day,” the band’s Australian frontman Sam Cooper told The Local.

The capital has no shortage of bars and restaurants putting on special events for St Patrick’s from Thursday into the weekend.

From Thursday until Sunday, Brado’s promises “a very long party, hectoliters of stout and tons of oysters”, while on Thursday the Trinity College Pub is planning special events from aperitivo to karaoke until 2am.

The ‘Irlanda in Festa’ event returns to Bologna this year, with a four-day programme of live music, food and drink at the city’s Parco della Montagnola.

Entrance is free, and organisers from the city’s Estragon Club promise a menu featuring everything from fish and chips to Baileys cheesecake, while “Irish and Italian bands will alternate on stage, united by a love of folk”. See more information here.