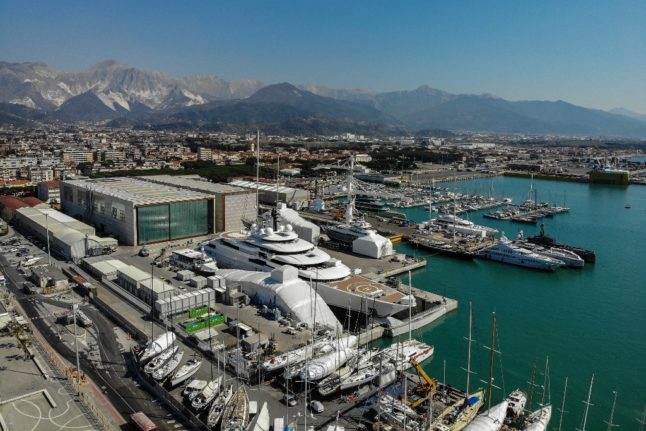 In a dry dock in the Tuscan seaside town of Massa stands the ‘Scheherazade’, which has suddenly become the most infamous yacht in Italy due to speculation it could belong to Vladimir Putin.

The 140-metre craft worth an estimated $700 million is now the subject of an investigation into its ownership by Italy’s financial police as Italy seizes the assets of oligarchs linked to the Russian regime.

Several luxury yachts belonging to oligarchs have already been confiscated by Italy and other countries in Europe since Moscow invaded Ukraine last month. The seizure of the ‘Scheherazade’, however, would be the most spectacular were its ownership traced to the Russian president.

But first, police will need to unravel the mystery of who actually owns it.

For several months, the yacht has been parked for maintenance work at The Italian Sea Group’s shipyard at the Marina di Carrara, within the western seaside town of Massa.

On Wednesday, an AFPTV journalist witnessed no obvious signs of activity on board, although some men were working nearby.

A source close to the ongoing probe by Italy’s financial police told AFP that the investigation could be wrapped up within days.

“We are in a phase of delving deeper and it’s generally more complicated,” said the source. “It’s not always easy to attribute ownership.”

Have a look at this wonderful yacht called Scheherezade. It’s been talked about for a while. The rumour is it belongs to Vladimir Putin. But there is not much proof, only talks. And that's why it hasn’t been arrested yet. It just sits there in the port of Carrara (🇮🇹). pic.twitter.com/1vnYDREc0Z

Built by Germany’s Lurssen in 2020, the yacht features two helipads, a swimming pool and a movie theatre, according to the SuperYachtFan website, which researches yachts and their owners.

News reports say the yacht, which flies the Cayman Islands flag, is owned by a company registered in the Marshall Islands.

Its captain is British, but the rest of the crew is Russian, according to researchers at the anti-corruption foundation of Russian dissident Alexei Navalny, which on Monday posted a video on YouTube attributing the yacht to
Putin.

Researchers cited a crew list in their possession that included several members of Russia’s federal protective service, which is charged with Putin’s security.

But on Wednesday Paolo Gozzani, the head of the local CGIL union, which includes shipyard workers, said the crew of the ‘Scheherazade’ had suddenly changed in recent days.

“The crew was exclusively made up of Russian personnel,” Gozzani told AFP. “And then suddenly all the staff was changed with a British crew, and the reasons are still not clear.”

The New York Times has reported that US authorities have collected evidence linking Putin to the luxury ship, which made two trips, in 2020 and 2021, to the Black Sea resort of Sochi.

The Italian Sea Group said in a statement the yacht was “not attributable to the property of Russian President Vladimir Putin”. 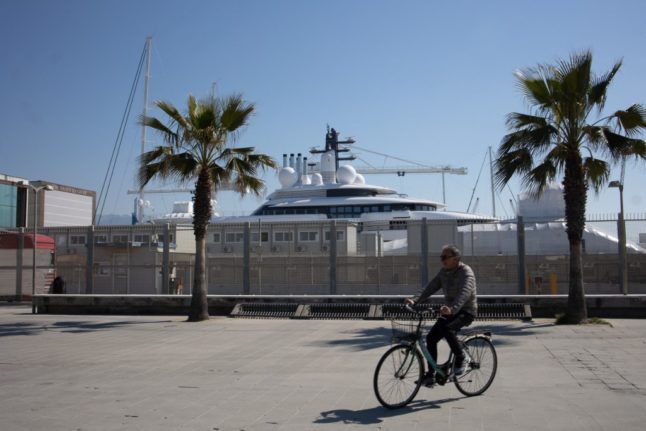 A man rides his bicycle near the multi-million-dollar mega yacht Scheherazade, docked at the Tuscan port of Marina di Carrara, Tuscany, on March 22, 2022. Photo by Federico SCOPPA / AFP

Its assessment was based on “the documentation in its possession and following the findings of the checks carried out by the relevant authorities”, said the shipyard’s owner.

Interviewed by the New York Times earlier this month, the British captain of the ‘Scheherazade’ said Putin was not the owner of the ship and that the Russian president had never set foot on board. Refusing to give the owner’s
name, the captain said it was no one facing current sanctions.

In an address to the Italian parliament on Tuesday, Ukrainian President Volodymyr Zelensky called on Italy not to welcome Russia’s oligarchs, and to seize all financial and real estate assets including yachts, “from the Scheherazade to the smallest”.

The sanctions, said Draghi, “have severely affected the economy and financial markets of Russia, as well as the personal assets of the people closest to President Putin”.