“I am beginning to think that those people are right when they say ‘It is useless to talk to him, it’s just a waste of time’,” Draghi told Italian newspaper Il Corriere della Sera.

Draghi said he had always felt French President Emmanuel Macron, who currently holds the EU’s rotating presidency, “is right to try every possible avenue of dialogue.

“But I have the impression that the horror of the war with its carnage, with what they have done to children and women, is completely independent of the words and phone calls that are made,” the Italian leader said.

So far, Putin’s goal had not been the search for peace, “but the attempt to annihilate the Ukrainian resistance, occupy the country and entrust it to a friendly government,” Draghi continued.

Draghi spoke with Putin in recent days about achieving peace.

Like many others at the beginning of the conflict, Draghi had thought a quick victory for the Russians was likely.

“This did not happen: the victory did not come and we do not know if it will ever come. The Ukrainian resistance is heroic,” Draghi said. 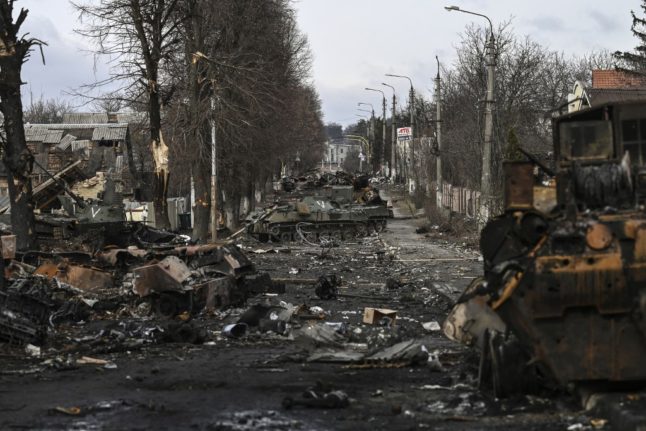 Draghi’s comments follow the discovery of mass graves in the Ukrainian town of Bucha, recently occupied by the Russian army. Photo by ARIS MESSINIS / AFP

“What awaits us is a war of resistance, prolonged violence with destruction that will continue. There is no sign that the Ukrainian people can accept the Russian occupation.”

Speaking of the atrocities in Bucha, where civilians were left dead in the street, Draghi was cautious to label what Russian troops committed there – as are other European leaders such as Spain’s prime minister who saw possible ‘genocide’ in Ukraine.

“What do we want to call the horror of Bucha if not war crimes? But I understand that terms like ‘genocide’ or ‘war crimes’ have a precise legal meaning,” he said.

“There will be a way and time to verify which words best suit the inhuman acts of the Russian army,” Draghi added.

Draghi’s comments came after Italy said it would reopen its Ukrainian embassy in Kyiv from Monday.

The Ukraine war has sparked a Western push for sanctions against Moscow, including moves to drastically cut purchases of Russian gas.

The Italian government has taken steps to reduce reliance on Russia, such as signing a gas deal with Algeria.

Draghi said that while economic sanctions against Russia were “essential to weaken the aggressor,”  they would not necessarily stop the war in the short term.

Nevertheless, the West could help Ukraine directly by supplying weapons.

“We need to help the Ukrainians directly, and that is what we are doing. Not doing so would be tantamount to telling them: surrender, accept slavery and submission – a message contrary to our European values of solidarity,” Draghi said.