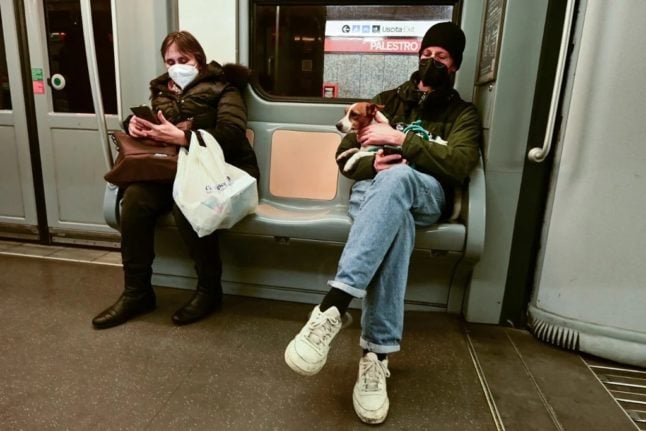 The use of high-grade Ffp2 masks will remain mandatory on public transport in Italy until September 30th. Photo by Miguel MEDINA / AFP

As expected, Italy’s remaining rules on wearing masks in certain public places will end from Thursday, except for on most forms of public transport, in healthcare settings, and in care homes.

The change was confirmed in an ordinance signed by the health minister, Roberto Speranza, late on Wednesday following a cabinet meeting.

The mask mandate will continue to apply to all forms of local and long-distance public transport within the country until at least September 30th, including on buses, trains, trams, and ferries, the ordinance states.

However flights are not mentioned in the new ordinance, as ministers have reportedly chosen to lift the rules for air passengers entirely.

The mask-wearing requirement in cinemas, theatres, concert halls, and at indoor sporting events has also been dropped.

Schools will not require pupils to wear a mask when sitting final exams, though masks continue to be recommended during exams and on school premises.

No further details of the rule changes were immediately confirmed.

The government is expected to publish a decree in the coming days containing full details of the updated regulations.

There has been no indication yet as to whether the government also plans to relax the rules on quarantine and isolation for those who test positive for Covid-19.

From Thursday the Covid vaccination obligation also comes to an end for over-50s in Italy, but remains in place for healthcare and care home staff until at least the end of the year.

Local authorities and individual businesses in Italy can still set different rules than those at the national level, meaning certain rules may continue to vary from one place to another.

The government had initially planned to scrap rules on wearing masks everywhere other than in healthcare settings under its ‘roadmap’ first set out in March, but the health minister has reportedly taken a more cautious line amid rising infection rates.

After weeks of steadily falling infection rates overall in Italy, the contagion curve has now risen again, from a seven-day average of 15,000 last week to 21,000 this week.

An uptick in new infections has now been reported in 14 of Italy’s 21 regions and autonomous provinces.

There is particular concern about local spikes in cities, such as Milan, where the daily number of new confirmed cases shot up from 261 to 1,095 within the space of a week.

The recent increase in Italy, as in other countries including Portugal and Germany, is thought to be due to the spread of the coronavirus sub-variant BA.5, which the Italian Higher Health Institute (ISS) says is more contagious and has a greater ability to circumvent immunity given by vaccines.

Current estimates of the number of cases in Italy caused by BA.5 range from 1.4 percent to 13 percent of new infections.