A fire and rescue helicopter prepares to drop water on a wildfire outside Rome on June 27th, 2022. Photo by Andreas SOLARO / AFP

Health authorities issued a red alert for two-thirds of the country on Wednesday as the prolonged heatwave sweeping Italy pushes temperatures well above average for the end of June.

By Thursday, every part of Italy is under either a red or amber heat alert, except for the northern provinces of Turin, Genoa and Bolzano.

Red warnings indicate emergency conditions with possible negative effects on everyone’s health, while amber warns the heat may pose a health risk, particularly to the elderly, children and those with chronic illnesses.

Peaks of 40C were recorded on Tuesday, when 12 areas were already on red alert and many others on a lower-level amber alert due to the intense heat. 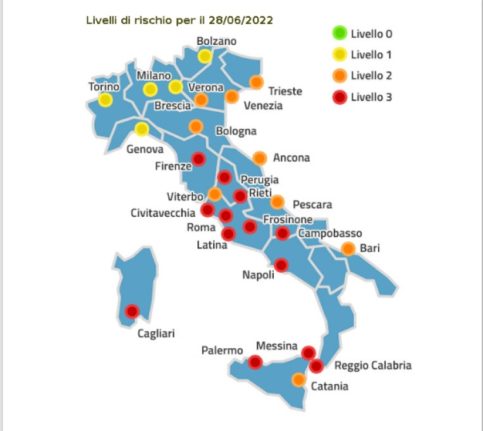 The current heatwave, the latest in a series to have already hit Italy this year, has worsened wildfires and drought hitting many parts of the country after months of low rainfall and an unusually dry winter.

The Po, Italy’s longest river, was up to 80 percent lower than usual on Monday according to Fabrizio Curcio, head of the civil protection department.

The department hasn’t ruled out the necessity of water rationing measures during the day, with restrictions on water use already in place in many towns in drought-hit areas.

Several regions have asked to be granted a ‘state of emergency’ under the government’s much-anticipated decreto siccità (drought bill), which is expected to be announced by the end of this week.

Experts have repeatedly warned that intense droughts and longer, earlier heatwaves are among the consequences of climate change.

Storms and heatwave peak – once again the country is divided in two by the weather forecast this week following an intense heatwave. Thunderstorms are expected on Monday as the heat breaks in many northern and central regions, including in Piedmont, Lombardy, and Veneto.

San Lorenzo – One of the most romantic evenings of the year in Italy, this is said to be the night when shooting stars can be seen across the country. This is because of the passing of Perseid, a meteor shower that cross the sky at this time of year and is known in Italian as lacrime di san lorenzo, or  ‘San Lorenzo’s tears’. August 10th is the name-day (onomastico) of San Lorenzo.

In fact, there’s a good chance of seeing falling stars any day this week. Other than stargazing, you might want to check out local events held in your town and city to mark the occasion – usually held in Piazza San Lorenzo, if there is one.

Jazz in Rome – for those in the capital, there’s no shortage of events to enjoy this month. Castel Sant’Angelo near the Vatican is putting on ‘Classic Mit Jazz‘ on August 11th: a fusion of jazz and classical music with an ensemble that features a sax and drums as well as a violin and cello. Tickets are €12 full price, €2 for 18-25 year-olds.

Ferragosto weekend – Most of Italy is already chiuso per ferie (closed for the holidays) from early August, but the Ferragosto national holiday on Monday, August 15th is when the whole country really clocks off and heads to the beach.

It’s not unusual for the minority of people  who aren’t already on holiday this month to take a long weekend off starting Friday, August 12th.

Traffic is always particularly heavy over the Ferragosto weekend, particularly southbound on major motorways. So if you’ll be travelling by car it’s a good idea to set off as early as possible on Saturday morning – or Friday if you can.

Serie A kicks off – Italy’s top football league starts with the first two matches held on August 13th this year, more than a week earlier than the last competition. While there have been suggestions that the date would have to be pushed back if extreme heat persists, officials insist that there will be no delays.

Summer sales – Last chance for sales shopping (in some regions) – the saldi are closely regulated in Italy, with only two big sales allowed per year

This year’s summer sales season runs until August 13th in Lazio, the region where Rome is based, as well as in Liguria. Offers continue in most other regions until the end of August. 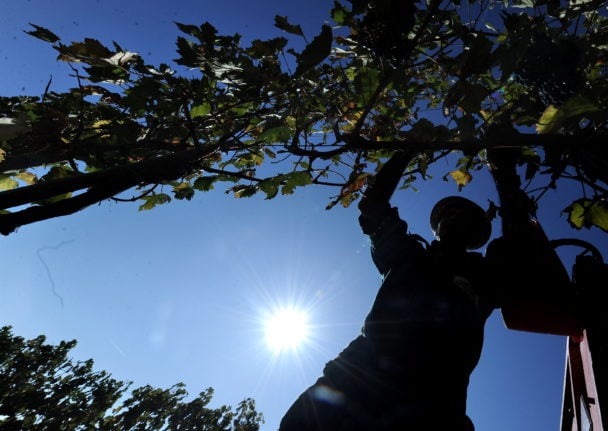