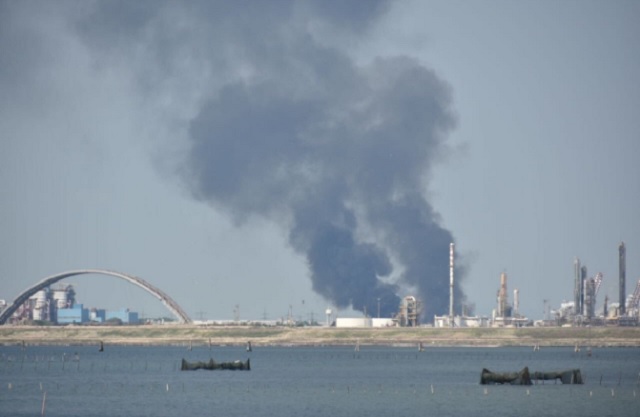 The clouds of smoke were visible from several kilometres away. Photo: Comune di Venezia

“For the moment, there is no danger to the population,” the city council said, citing experts who had attended the blaze.

However, they noted that the operation to tackle the fire was expected to last for several more hours.

Ten of the plant's 50 employees had been working when the fire broke out, all of whom were safely evacuated according to local newspaper Il Corriere del Veneto. The paper reported that four of the workers had been taken to hospital due to possible inhalation of toxic fumes.

The fire broke out at the Veritas rubbish depot, where bedding and wooden furniture caught fire, according to the council's statement. The areas where plastic and metal waste were processed are not thought to have been affected, reducing the likelihood that the smoke contains toxins.

Authorities said there was “no reason to adopt any particular behaviour”, after some mayors in the region had earlier advised locals to keep windows closed and stay inside.

Nine teams of firefighters as well as Civil Protection Agency workers were at the scene on Wednesday, Fusina marked on a map of Venice.

The blaze comes less than a week after a fire broke out at a Rome scrapyard – with smoke clouds visible from the Vatican. Three residential buildings were briefly evacuated while firefighters assessed the possible environmental damage.

And in early May, another rubbish depot burst into flames near Rome, prompting the local health authority to evacuate schools and offices in the area.

READ ALSO: Keep up to date with the latest news and views from Venice