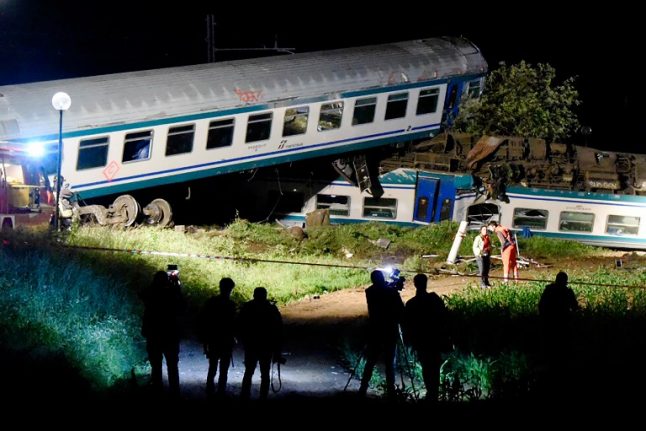 The train crash in Caluso, near Turin. Photo: Alessandro Contaldo/AFP

The crash occurred near the town of Caluso, just north-east of Turin, forcing the engine and two carriages off the rails.

“At 11.20 pm the regional train 10027 Turin-Ivrea hit a heavy goods vehicle that had stopped on a functioning railway crossing after crashing through the barriers,” RFI, which manages Italy's rail network, said in a statement.

“According to early information, the driver of the train was killed and many other passengers have been injured.”

Local police said there were between 40 and 50 people onboard the train, which was the last service of the night running from Turin to the suburb of Ivrea. A total of 23 people were injured, Italian media reported, at least three of them seriously.

The train driver, said to be a local man in his 60s, was thrown from the train and died at the scene.

The second victim, a Romanian man living in Italy, was taken to a Turin hospital by helicopter with severe injuries but did not survive. At the time of the accident he was in a van accompanying the heavy goods vehicle, media reported. The vehicle, a heavy truck carrying equipment for road surfacing, was registered in Lithuania and formed part of a convoy headed to a warehouse in nearby Foglizzo.

The van that was in front of it passed safely through the level crossing but when the barriers started to come down, the vehicle failed to brake in time and came to a stop on the tracks, eyewitnesses said.

“I started yelling over the radio to get the driver to reverse, but then the train came,” one of the driver's colleagues told La Repubblica.

“Everything happened so fast, I felt the train break suddenly and then I found myself in hell and around me everything was black,” survivor Paolo Malgioglio told the Corriere della Sera newspaper.

“It's like there was an earthquake out of nowhere,” another passenger told Repubblica. Authorities are investigating the cause of the crash, including whether the truck driver made errors. The man, identified as a 39-year-old Lithuanian national, was not injured in the impact and has been questioned by police.

As emergency services worked through the night to free survivors, many others were taken to hospitals in and around Turin.

Three people were airlifted in serious condition, local media reported, including the train conductor, who is said to have sustained a head injury and a broken pelvis. She is reported to be in a medically induced coma.

The line remained closed on Thursday morning and Trenitalia was running replacement bus services instead. According to consumer watchdog Codacons, there were nearly 200 serious accidents at level crossings in Italy between 2005 and 2016, resulting in 189 deaths. The group called the toll “unacceptable” and urged regional authorities to replace such crossings with alternatives that don't bring people or vehicles onto train tracks.

The crash comes after another accident in January that killed three people near Milan. Around 100 others were injured when the central carriages of a commuter train derailed due to a suspected fault in the tracks.

Last April, another train accident in the north killed two people and resulted in the temporary closure of the main railway line between Italy and Austria. And in July 2016, a collision between two trains in the south of Italy left 23 people dead and 52 others injured.