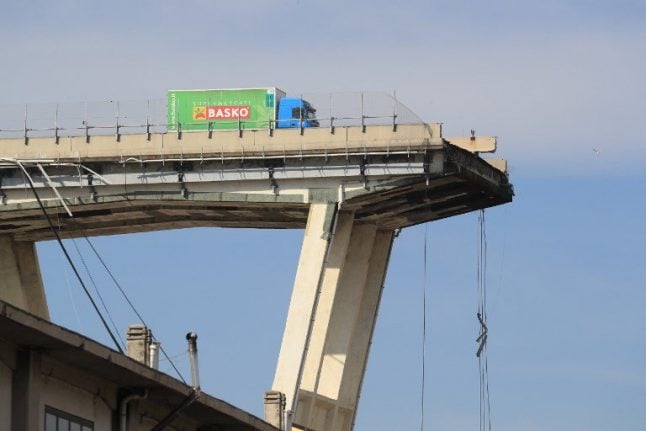 Meanwhile, Via Perlasca, a key road through the city, reopened for the first time since the August 14 collapse, a disaster that claimed 43 lives.

The new bridge is expected to be completed in 12 months at a cost of €202 million, Italian media reports.

Genoa’s mayor Marco Bucci said last week that the city would have new bridge in time for Christmas next year. But with work planned to start in March 2019, that doesn’t look likely.

Transport Minister Danilo Toninelli said this week that the new viaduct will open in 2020.

While experts called for the urgent demolition of the bridge's remains in August, warning that supports were weakening and at high risk of collapse, work has been repeatedly delayed.

It was initially hoped that the bridge could be demolished by the end of September, and the mayor then announced the work would begin in November.

The site of the disaster was closed off by authorities, as it was considered evidence in the investigation into who was to blame for the bridge's collapse.

The cost of the demolition work and clearance of the site is estimated at 19 million euros ($21.5 million), authorities said on Friday. A view of the Morandi Bridge in Genoa. Photo: Piero Cruciatti/AFP

The work will begin with the demolition of a building under the western part of the bridge that is still standing.

In addition, a deadline for owners of 266 homes to sell their property in the area under the bridge affected by the collapse in order to get compensation expires on Thursday.

Authorities in Genoa have chosen a design by Italy's most famous living architect, Renzo Piano, to replace the collapsed bridge.

“This bridge should last 1,000 years and should be made from steel,” Piano said when he presented his design for the new bridge in September. In honour of Genoa's maritime heritage his project resembles a boat, incorporating metal 'sails', as well as 43 lamps for each of the victims.

The 1,100-meter-long steel structure will replace the overpass designed by Italian engineer Riccardo Morandi in the 1960s, using his trademark reinforced concrete. Other engineers had long expressed concerns about the bridge's endurance.