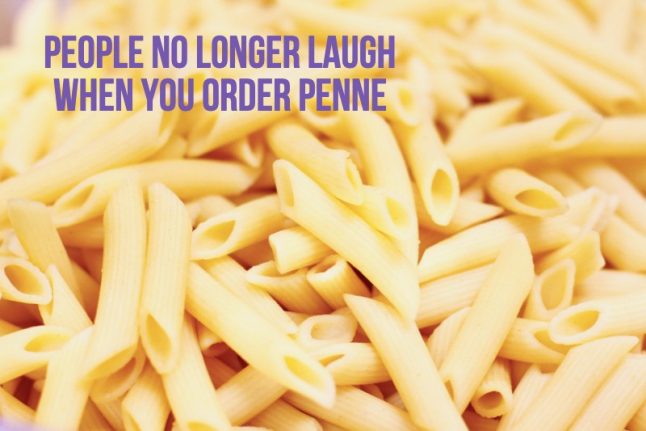 Do you know your 'penne' from your 'pene'? Photo: Marnee Wohlfert/Unsplash

You can express any emotion in a single syllable

They say a picture paints a thousand words, but a combination of a drawn-out ‘boh’ (a way of expressing 'what do I know?') or ‘dai’ ('come on!' or 'stop it!') and the perfect facial expression surely convey even more. If you’ve mastered this, you’re not far off bilingualism.

WORD OF THE DAY: Find the complete archive here Whether it’s to refer to a party, a car or an attractive man, this slang term for ‘cool!’ – literally translating as ‘what a fig!’ – is thrown about with reckless abandon by many young Italians, so if you've started using it, you could be turning into one of them.

You realize that every word needs a suffix

To the true Italian speaker, ‘bello’ is rarely enough – everything must be ‘bellissimo’! This applies to adjectives, adverbs, nouns – no word is safe.

For example, adding the suffix ‘one’ (meaning ‘big’) to the verb ‘sbrodolare’ (to dribble or spill) creates the word ‘sbrodolone’, meaning ‘big spiller’ or ‘messy eater’. Bonus points if you accompany your superlatives with an extravagant hand gesture.

READ ALSO: How to talk about love, sex, and dating in Italian Dating a local is one of the best ways to pick up a language, and a sure sign that it’s working is if you’ve picked up the Italian tendency for soppy pet names. Yes, ‘patatina’ (‘little potato’) is actually used as a term of affection in Italy.

You can guess someone’s hometown based on whether they say ‘adesso’, ‘ora’ or ‘mo’

When Italy was officially unified in 1861, less than ten percent of the population spoke standard Italian, so it’s no surprise to learn that Italian dialects are still widely used. Even in the standard language, significant variations in usage remain.

When you can tell a Tuscan from a Roman based on their vocabulary choices or pronunciation of ‘che cosa’, you’re doing well.

Italian pronunciation is largely straightforward for English speakers, but a common problem is the use of tricky double consonants.

Failure to distinguish between single and double consonants can lead to confusion between ‘capello’ (hair) and ‘cappello’ (hat) – harmless enough, but you wouldn't want to mix up ‘penne’ (a kind of pasta) and ‘pene’ (penis)…

The following sentence makes perfect sense to you: ‘It was raining sinks and it was dog cold so I had to dress like an onion’

Italian is full of strange idioms and phrases which can be difficult for new arrivals to comprehend. If they’ve become second nature to you, you’re well on your way.

READ ALSO: How and why learning a new language messes with your old one

Couldn’t figure it out?

When something bothers you, you don’t hesitate to exclaim ‘che schifo’ or ‘mi fa cagare’

Not only is this a sign of embracing the Italian disregard for over-politeness, but using Italian to express strong emotions is a sign that the language now comes naturally to you.

‘Che schifo’ (how disgusting) and ‘mi fa cagare’ (it makes me shit) are two of the blunter ways to make your disapproval known. You also know that it's bad manners to throw 'confetti' at a wedding, and understand friends who moan about their 'sensible skin'. False friends are a source of endless frustration for language learners – not to mention hilarity among natives when their foreign friends inevitably slip up.

QUIZ: Are you fooled by these Italian 'false friends'?

Once you’ve realized that ‘casino’ means ‘brothel’, ‘sensibile’ means ‘sensitive’ and ‘confetti’ means ‘sugared almonds’, you’re doing well. The only downside? You might start mixing up the meanings and using the Italian sense when speaking English.

You say things like ‘speriamo che faccia bello’ with confidence

Casually slipping the subjunctive into conversation will make you the envy of any friends still getting to grips with Italian grammar. The subjunctive mood, which tends to express ‘unreal’ conditions, is rarely used in modern English, and its forms can be difficult to learn. Learning Italian from textbooks and Dante is one thing, but being able to communicate with locals in real life is quite different. Dealing with text abbreviations – with not a single hand gesture to help you out – can be hard at first, so mastering the art is impressive.

The above example translates as ‘Dove sei? Domani ci sentiamo. Ti voglio bene’ or ‘Where are you? See you tomorrow. Love you.’

You know how to use ‘magari’ and do so frequently

‘But what does ‘magari’ mean?’ This question plagued you throughout Italian lessons and conversations with natives.

Once you’ve accepted that it can mean almost anything you want it to, and you feel comfortable using it in several different contexts (it most commonly loosely translates as ‘if only!’ or a sarcastic ‘yeah, right’), you have successfully assimilated into Italian culture. A version of this article was first published in November 2015.