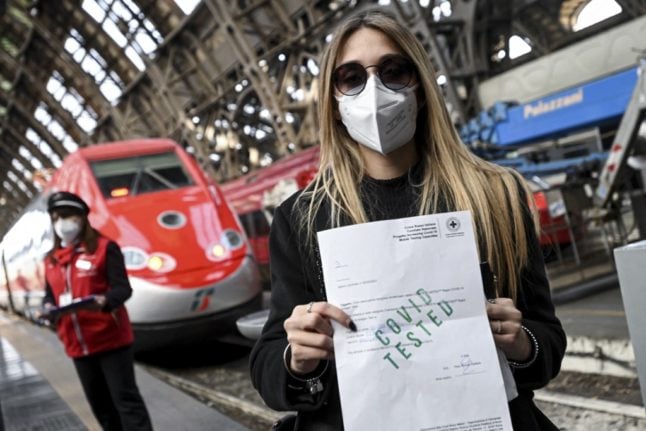 Negative Covid test certifcates are already required to board dsome train services in Italy, and may soon be needed for more domestic travel. Photo: Piero CRUCIATTI/AFP

Prime Minister Mario Draghi confirmed on Friday that some of the country’s coronavirus restrictions will be gradually relaxed from April 26th. But, while the government has given an outline of the reopening plan, many questions and uncertainties remain.

The big news on Friday was that lower-risk ‘yellow’ zones will be reintroduced from next week – and in these areas, various restrictions will be lifted including the current closures of bars and restaurants across the country.

The nationwide ban on travel between regions will also no longer apply in yellow zones, Draghi said, adding that people could also be allowed to enter and leave areas which remain classed as higher-risk red and orange zones using a travel “pass”.

However, he didn’t give any details of what form this pass would take or what the requirements would be.

According to a new draft decree reported in Italian media this week, the document will certify that the holder had either been fully vaccinated, had tested negative for coronavirus within the past 48 hours, or had already contracted and recovered from Covid-19.

The pass is expected to be in the form of a paper document at first, before later being made available via an app or QR code.

The certificate will be valid for six months for those who are vaccinated or recovered, and it can be issued by the vaccination centre, or in the case of recovery, by a hospital, family doctor or pediatrician.

Certificates obtained by testing negative, meanwhile, are to be valid for 48 hours and can be issued by testing centres or pharmacies.

What will the pass be needed for?

The document would need to be shown before boarding at airports or train stations, and if stopped by police at a checkpoint if travelling by car.

The government is also reportedly considering making the pass a requirement to attend certain cultural and sporting events, such as concerts and football matches, when they are allowed to reopen in yellow zones.

It is not yet clear when the new pass would be made available.

Further details on this and other aspects of Italy’s reopening plan are expected by Thursday, as ministers are currently finalising the country’s next emergency decree, due to come into force by Monday.

Italy has already launched some ‘Covid-free’ train services which only allow passengers to board if they can show a negative test certificate, and there are a limited number of ‘Covid-tested’ flights operating between Italy and the US:

Is this the same thing as a vaccine passport?

Italy’s new pass is also expected to be valid for travel within Europe.

It would work similarly to the European Digital Green Certificates scheme, due to launch in June in hopes of making summer travel safer within the bloc.

The proposed EU travel certificates, expected to be available via an app, will have information on whether a traveller has been vaccinated or not, if they have received a negative test result, or if they have recovered from Covid-19.

Italy’s government has not yet confirmed whether it will take part in the European scheme, and the country’s health minister has previously suggested that Italy wants to implement a pass which would also open up travel from non-EU countries.

However it is not known if the new pass could later be used for travel to or from non-EU countries.

The idea of ‘vaccine passports’ has proved controversial in Italy, with many arguing that they would be discriminatory and unfair and also amount to coercion to take what is supposed to be a voluntary vaccine.

There are also concerns about the idea of vaccinated tourists being allowed into the country while many of Italy’s own residents are still unable to access a vaccine, amid delays and bureaucratic problems.

The Italian government has not yet confirmed any plans to relax the current restrictions on international travel to Italy, however.

The tourism minister last week suggested June 2nd as a possible date for restarting non-essential travel, but this is not confirmed.

Testing and quarantine are currently required for almost all arrivals, and these requirements are expected to stay in place for many travellers for some time yet as the speed of Italy’s vaccine rollout lags behind the European average.

For more information on the restrictions please see the Italian Health Ministry’s website (in English).