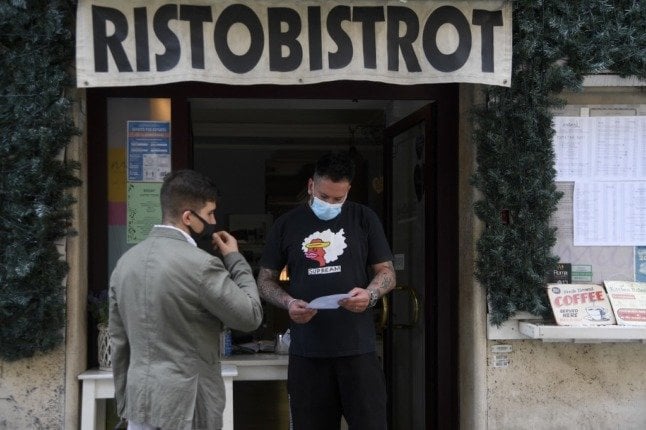 The Italian government announced on Thursday evening that the use of the country’s certificazione verde or ‘green certificate’ health pass scheme will be extended from Friday August 6th.

The certificazione verde or ‘green pass, as the health certificate is known in Italy, proves that the bearer has been fully vaccinated, has recovered from Covid-19 within the past six months, or has received a negative test result in the past 48 hours.

From August 6th, many businesses, leisure venues and cultural sites in Italy will soon be required to ask their customers to show a health pass before they’re allowed to enter.

Failing to check the pass can earn both customers and venues a fine from €400 to €1,000, while businesses that repeatedly break the rules risk being forced to close for up to ten days. However, the green pass is not required for domestic travel on public transport, long-distance trains or flights within Italy.

Ministers had also discussed making the green pass mandatory for domestic flights and on long-distance trains, but this was not included in the decree, and will be discussed at a later date according to Italian media reports

The government’s announcement did not mention hotels, supermarkets or shopping centres.

Until then, Italy’s current green pass rules will continue to apply, with the certificate only required at Italy’s international borders, wedding receptions, certain large public events such as trade fairs or sports competitions, or when visiting someone in a care home.

Who needs to show it

The green pass is expected to be made a requirement for everyone in Italy over the age of 12.

Under current rules only children under two years old are exempt from the health pass requirement, but this is expected to change due to the fact that vaccinations are only open to over-12s so far in Italy. The government has not yet confirmed this, however.

At the moment Italy’s digital health certificate is only available to people who were vaccinated, tested or recovered in Italy. If that’s you, find out exactly how to claim it here.

If you got your shots, tests or treatment elsewhere, what you’ll need to do depends on the country.

READ ALSO: What documents do Americans need for travel to Italy?

At the moment, Italian authorities are allowing people from other countries to use equivalent health documents (such as the US CDC card) when crossing the border and in other cases where it is needed within the country.

It appears likely that these rules will remain the same for visitors under the expanded scheme, though the government has not yet confirmed this.

It’s not yet known when the rules may change for people arriving from or vaccinated in other countries, including the UK.

See here for further details of how the new rules may affect people travelling to Italy this summer.

The government also confirmed that the Italian green pass will continue to be made available to those who have only had one vaccine dose.

The government had been discussing whether or not to make the pass available in the case of vaccination only for those who are fully immunised – instead of 15 days after the first dose as is currently the case in Italy. Most other European countries currently only issue the pass after both doses.

Why the ‘green pass’ scheme is being expanded

Italy has been looking at ways to expand the use of the health pass after France last week announced a similar extension to its version of the scheme in order to slow rising infection rates and to encourage vaccinations.

The Italian government has said it hopes the expansion of the ‘green pass’ scheme will persuade more people to book their vaccinations after health ministry data showed a recent slowdown in the number of first jabs administered.

Italian Prime Minister Mario Draghi on Thursday night stressed that the health pass requirement was being introduced as an alternative to new restrictions and business closures as the number of new cases recorded in the country has spiked.

”The use of vaccine certificates is needed to keep the economy open,” Draghi said, urging people to get vaccinated.

“No vaccines mean a new lockdown”.

The government is hoping that the expansion of the green pass requirement, along with changes to the parameters of Italy’s risk zones, will be enough to keep all regions in the low-restriction ‘white’ zone until at least mid-August.