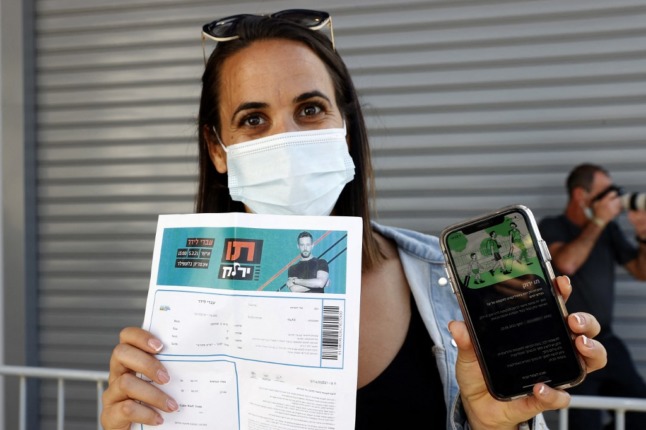 Israel's Green Pass is one of the non-EU Covid certificates accepted in Italy. Photo by JACK GUEZ / AFP

As Italy prepares to extend the public spaces where a so-called ‘green pass’ is required, the government has given its first indications about how visitors from non-EU countries can access the scheme.

Travellers from any country in the EU or Schengen Zone can already use their national certificates in Italy as they would at home.

In its latest ordinance of July 29th, the Italian Health Ministry confirmed that documents issued by health authorities in any of the following countries would also be accepted in Italy:

Certificates can be shown in digital or paper format, the Ministry said, without giving further details.

While visitors from Canada, Israel, Japan and the US can already use health certificates issued in their own countries to avoid quarantine in Italy, the Italian government has separate restrictions on the UK that oblige travellers to self-isolate for five days on arrival.

Quarantine applies to everyone arriving in Italy from the UK – even if they’re fully vaccinated or recovered, and including after they test negative for coronavirus in the 48 hours before their trip, as all people departing from the UK are required to do.

Those restrictions will remain in place until at least August 30th.

EXPLAINED: How travel between the UK and Italy has changed

In the meantime, Italy’s extended green pass will come into force from August 6th – after which a health certificate will be required to enter indoor seating areas at bars and restaurants as well as concerts, museums, galleries, theatres, cinemas, sports stadiums, theme parks, indoor swimming pools, spas, and other venues and large events.

People with a certificate from an EU or Schengen country can continue to show their own version of the pass, while the Health Ministry’s latest announcement suggests that people whose documents were issued in Canada, Israel, Japan, the UK or the US will be able to do the same.

The decree is not explicit on this point, however, and further announcements may follow in the coming days.

While some other EU/Schengen countries that already recognise non-EU health passes, including France and Switzerland, allow vaccinated travellers to convert their home country’s certificate into a separate EU version, it is not yet clear whether Italy intends to add this extra step.

READ ALSO: When, where and why will you need a Covid health passport in Italy?

Italy’s government has not specified how it will verify non-EU certificates, which do not necessarily contain a QR code compatible with the EU-wide system.

The Italian version of the health pass, which is only available to people who were vaccinated, tested or recovered in Italy, comes in digital or paper form and can be checked using an official authentification app.

According to reports from users, Italy’s VerificaC19 app does not currently appear to read QR codes from certificates issued outside the EU, including via the UK’s NHS app.

As things stand, the only way for people who are visiting Italy to obtain the Italian pass is to get a coronavirus test here. Find more details here.

The Local will report any further details of Italy’s green pass as they become available. In the meantime, find more information on the government’s Digital Covid Certificate website (in Italian).