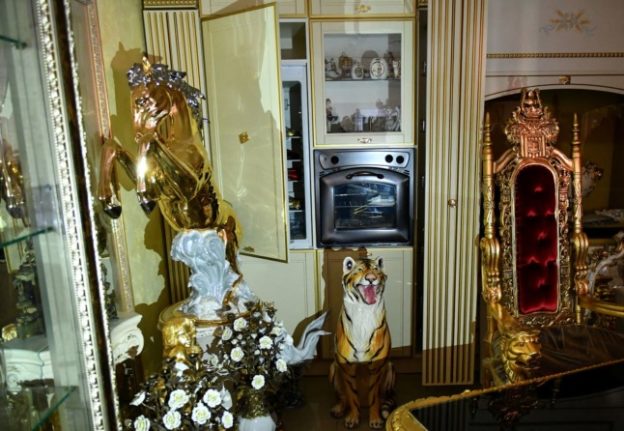 Furniture inside one of the Casamonica clan’s eight illegally built villas seized by Rome police in 2018. Alberto Pizzoli/AFP

The organised crime family hit the headlines in 2015 when it laid on a flashy funeral in Rome for “uncle” Vittorio Casamonica, with his coffin borne on a gilded horse-drawn carriage.

Rose petals were dropped from a helicopter and posters outside the church in the east of the capital declared him the “King of Rome”, while mourners were greeted with music from the film “The Godfather”.

Despite family members boasting in wiretapped conversations of being powerful enough to challenge Italy’s storied mafias, the Casamonica were long seen as a local, if violent, criminal gang.

READ ALSO: ‘The recovery fund is in their sights’: Europol warns of Italian mafia profiting from crisis across EU

But that all changed this week, when a Rome court classified it as a mafia association and sentenced five of its chief members to up to 30 years each, under Italy’s strict prison regime for mobsters.

“It’s a very important verdict, primarily because it destroys the illusion that there is no mafia in Rome,” said Nando Dalla Chiesa, a professor of organised crime at Milan University.

“The city has struggled to accept the fact that there are not just elements of the powerful (Calabrian) ‘Ndrangheta or (Neapolitan) Camorra crime groups here, but there’s a homegrown mafia too,” he said. Furniture inside one of the Casamonica clan’s eight illegally built villas seized by Rome police in 2018. Alberto Pizzoli/AFP

Two other crime families have been designated as mafia in the municipality of Rome in recent years, but both are based in the neighbouring seaside town of Ostia, not in the Eternal City itself.

The court found the Casamonica members guilty of drug trafficking, extortion and usury.

The clan – which has its roots in the Sinti Roma community – controls the southeastern suburbs of the capital and the Alban hills beyond, according to a report commissioned by the Lazio regional authorities in July.

The Sinti are a traditionally nomadic ethnic group that has lived in Europe for centuries.

The first Casamonica moved to Rome from the Abruzzo region in 1939. When Vittorio died in 2015, his descendants were known to police as particularly fierce loan sharks with a penchant for bling.

Vittorio had learned from a friend in Rome’s underworld in the 1970s — Enrico Nicoletti, the “cashier” of the Banda della Magliana, which controlled drug trafficking in the capital.

Like Nicoletti, “Uncle Vittorio” cultivated ties to the rich and powerful. He was “a man with contacts… (in) the police, the Vatican… he got in everywhere, got whatever he wanted”, one witness said.

The family grew rich and built villas with marble and gold furnishings, swimming pools and large stallion statues – a nod to their horse trader origins – as well as bundles of cash hidden in walls, witnesses said.

It forged contacts with Colombian drug dealers and started trafficking cocaine into the capital. A major drug bust in 2012 saw 32 members of the clan arrested and millions of euros in assets seized, and the family came under greater scrutiny.

Rome Mayor Virginia Raggi ordered eight illegal Casamonica villas – complete with chandeliers, ceramic tiger, thrones and imitation frescoes – bulldozed in 2018. She vowed this week that “the fight will go on”.

The Casamonica does not have a boss but is an “archipelago” of genealogical branches joined by arranged marriages, according to the report by the Observatory on Organised Crime.

Its “eccentric aesthetic taste” sees Romany traditions given a Camorra-inspired twist, while its members share a passion for Neapolitan crime songs and trap music, it said.

Women play significant roles, particularly in drug dealing and loan collection, but are not allowed to work outside the home. Daughters are removed from school once they get their first period.

Romantic relationships with non-Sinti women are seen as dangerous and barely tolerated, the report said.

Cerreoni was one such woman. The ex-wife of Massimiliano Casamonica, who turned state witness after years in which she said she was controlled, belittled and threatened by the family.

“They ruined my life… I hadn’t just married Massimiliano, but the whole clan,” she told the court last year.

When she tried to break free, “They kidnapped me. They threatened to dissolve me in acid.”

She eventually manage to flee, along with her children.

Her testimony has been key for investigators long hampered by difficulties in understanding the Casamonica, who speak in a mix of Sinti, the regional dialect of Abbruzzo, and Roman slang.

“How big a blow this verdict is to the clan is yet to be seen, but one thing is clear: it certainly no longer has the great cockiness, the impunity, it once enjoyed,” Chiesa said.